Find out more
Centre for Online and Distance Education

History of Distance Education at University of London

The University of London (UoL), has been associated with, and a pioneer of, every stage of the development of distance education, from the correspondence schools of the 19th century to the online learning practices of today - always in the service of widening access to the University’s programmes. 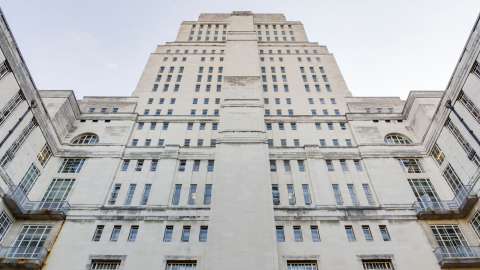 History of Distance Education at University of London

The University of London (UoL), has been associated with, and a pioneer of, every stage of the development of distance education, from the correspondence schools of the 19th century to the online learning practices of today - always in the service of widening access to the University’s programmes.

Although the University of London began in 1836 as a purely examining and degree awarding body, to which approved institutions could submit students for examination, by1858, the University started offering its own degrees. In 1865, the decision to make London exams available remotely allowed students to complete assessment processes without physical attendance in London. Until the establishment of the Council for National Academic Awards (CNAA) in 1964 and the Open University five years later, the University of London offered the only pathway, anywhere in the world, to obtaining a degree without attending a university.

The UoL has worked continuously ever since to establish and maintain a network of over 650 bona fide examination centres that maximise flexibility of location and underpin the integrity of assessment, which until 2020 was conducted almost entirely on a face-to-face, pen and paper basis.

The impact of Covid-19

The written examination assessment model remained almost entirely unaltered up to the year 2020.

However, the unprecedented exigencies of the coronavirus (Covid-19) pandemic and severe disruption of the majority of the University’s planned written examinations required extraordinary measures to be taken to ensure the continuation of assessment online whilst global restrictions remained in place.

Around 110,000 examinations were moved online in the space of around three months. This was a significant departure from many perspectives, for the University’s assessment model has long provided the central keel of rigor, quality and standards that has permitted it to navigate some of history’s most difficult regulatory waters and enjoy widespread recognition by regulators, students and employers to this day.

Distance education for the 21st century

By 2020 there were 50,000 students in 190 countries studying for a UoL degree. The federal nature of UoL means that students have the opportunity to pursue degrees where the curriculum and assessment is offered by world-leading institutions in their field such as UCL, LSE and SOAS, but with local support.

UoL works with over 100 Recognised Teaching Centres (RTCs) in 42 countries, appointed through a robust recognition process. These are independent institutions, many of them also universities, which offer face-to-face academic and pastoral support for UoL students. 80% of their undergraduates choose to study face-to-face in this way, most of them full-time.

From paper to digital

Over the UoL’s first 150 years, distance learning evolved from a system that was, in reality, a correspondence course that provided, instead of teaching, a cursory framework syllabus, with students themselves sourcing readings, evidence and learning for themselves in preparation for summative assessments completed locally and shipped back to London for marking by central academic boards overseeing all awards.

Successive generations of distance education provision at UoL have evolved from this via production of detailed course specifications (the Independent Guided Study Scheme in the 70s and 80s), and the system of sending students their box of course books in the late 80s and 90s, to online learning today.  Present day students access interactive online pedagogical platforms, offering flexible and blended delivery through Recognised Teaching Centres as well as individualised teaching and learning on-line, built around an online library that now accommodates over 100 million items.

The spread of distance education within the university

For many years distance education within the University of London was a distinct and discrete activity, largely separated administratively and in its governance from the face-to-face teaching activities of the member institutions through what was then called the External System. The 1980s and 1990s were seen as an era for exploration and development. Among UoL member institutions there were some notable pioneers:

In 2000 a Distance Education Resource Centre was established to support capacity building for teaching and learning within the federal university, improving the quality of educational provision within the External System, and embracing the educational opportunities presented by new technologies.

A Virtual Campus Project was launched in the same year to develop a shared, networked service delivery system to support online teaching and learning in the External Programme and to provide virtual campus services to other areas of the University on a cost-recovery basis.

Between 2001 and 2004 the Distance Education Resource Centre provided a ‘Drop‐in’ facility, supported the launch of an eCampus service and of the Online Library and carried out a wide range of consultancy work for external clients including Tata Energy Research Institute in India, the Commonwealth of Learning in India, Kigali Institute of Education in Rwanda, and JISC in the UK.

A Centre for Distance Education

2008 was a momentous year for CDE. An HEFCE e-Benchmarking project contributed to by CDE became a cornerstone of a ten-year eStrategy for universities in England and Wales. CDE supported a successful bid by the Vice-Chancellor to host the fifth pan-commonwealth forum on open learning in London, attracting over 700 delegates from 70 countries for the five-day event in July 2008, with an associated meeting of Vice-Chancellors organised in collaboration with UNESCO immediately before the Forum. The success of these bids was widely considered a significant achievement, and an important step not only in raising the profile of the CDE, but also that of the External System, internationally.

But by 2008 the nature of distance education had changed enormously, with the rapid growth of virtual learning environments, increasing focus on user generation of Web content and person-to-person interaction via web applications, and increasing interest in blended and flexible approaches to learning, resulting in a blurring of the traditional demarcations between distance and campus-based learning.

These dramatic changes made it much harder to maintain the original role of CDE of providing specialist advice and development support to course teams in the Colleges preparing distance learning programmes within the External System. As member institutions developed their own in-house capacity for developing online learning, the focus for CDE began to shift more towards new programme planning, through discussions with academic managers in Colleges, establishing protocols and guidelines for programme developments, and contributing to programme development more broadly through initiatives such as the eBenchmarking project.

In 2010, the first Visiting Fellows were appointed to CDE and in 2015 a new CDE Strategy was approved by the Learning,Teaching and Assessment Sub-Committee (LTAS).

From CDE to CODE

In 2017 Dr Linda Amrane-Cooper was appointed as the new head of CDE, supported by Mark Beasley, reporting to Mary Stiasny, Pro Vice-Chancellor (International) and Chief Executive of University of London Worldwide. The same year the Fellowship was expanded to 25 and a vigorous new programme of activity began including:

Reflecting the widespread move to online teaching prompted by the Covid-19 pandemic of 2020-2021, CDE was rebranded as the Centre for Online and Distance Education (CODE) in 2022 and the membership was increased to 42 Fellows.