Facilitating academic friendship and collegiality between France and Britain for over a century. 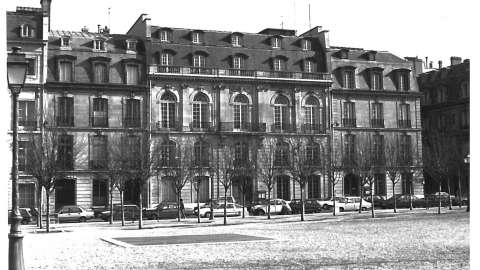 Facilitating academic friendship and collegiality between France and Britain for over a century.

The Institute has a long history of supporting French and British academic collaboration that pre-dates the Entente Cordiale – the historic agreement that significantly improved Anglo-French relations in 1904.

The University of London Institute in Paris was the brainchild of Miss Edith Williams, who came to the Sorbonne to train as a teacher of English. She succeeded in becoming the second-ever woman to receive the Agrégation d’anglais (a qualification necessary for teaching at university level) and started holding weekly English classes in her flat. In 1894, thanks to the support of the British Ambassador and the French Government, she formed the Franco-British Guild.

In the aftermath of the Great War, the Guild was reorganised to become the British Institute in Paris, the first British institute in continental Europe that offered both French and English courses. At that time it was an integral part of the Université de Paris and was also supported by a consortium of British universities including the University of London. A library and a clubroom were added, and leading French and British intellectuals and academics were invited to lecture. The Institute's work continued during German occupation of France. Some staff accepted the hospitality of the University of Reading, where they offered parallel classes in French and English to British and French officers respectively to improve the liaison between them. Others remained in Paris, from where they contrived to run covert distance courses in English through-out the war.

The Institute was incorporated into the University of London in 1969 and sits alongside the School of Advanced Study as a Central Institute of the University. In 1976, the Institute moved into larger, more handsome premises overlooking the Esplanade des Invalides, thanks to a grant from the Rayne Foundation, and shares its building with the British Council. It officially changed its "British Institute" title to the "University of London Institute in Paris" in 2005.

The University of London Institute in Paris runs interdisciplinary undergraduate programmes in the fields of French Studies and International Politics. The institute also runs a postgraduate programme in Urban History and Culture with an option of a term at Queen Mary University in London. Additionally, it hosts two postgraduate Queen Mary University of London programmes in Paris in law and international relations.