Director of Graduate Studies and Research

Director of Graduate Studies and Research

Summary of research interests and expertise

Anna-Louise is Director of Research at the Institute where she is also Professor of French Studies and convenor of the MA in Urban History and Culture, delivered in partnership with colleagues from the School of History, Queen Mary University of London. She is a member of the Advisory Board for the EFF&T Chair of Paris-La Villette Architecture School, book reviews editor for Francospheres, and a regular participant in actions led by the collective Quartiers Solidaires, including the P’tits-Déjs-Solidaires Free Breakfast Movement. She was born in Scotland and now has three Franco-Scottish offspring.

With a background in comparative literature and an early interest in the intersections between ethnography, literature and review publishing that are characteristic of the mid-twentieth century and the work of Jean Paulhan in particular (The Extreme In-Between: Jean Paulhan’s Place in the Twentieth Century, Legenda, 2006), Anna-Louise's research is today located at the intersection between urban sociology, multilingualism and cultural history. She has led a series of collaborative projects drawing on methodologies from human geography and cultural translation to develop fieldwork and experimental workshops with people in situations of protracted mobility and administrative vulnerability in Europe. This work aims to consider translation’s role as a creative process of decentring that might also be therapeutic or helpful in buffering the difficult realities faced by many migrant people today. This work led to the creation of the Paris Centre for Migrant Writing and Expression and has given rise to several small exhibitions and a series of one-off books called the Numimeserian Collection, held in the Paris Municipal Library Collection. And also the La Distrib magazine (see below), a collective work that gathers material generated in and around the daily breakfast in the street.

In parallel to these developments, she writes in different narrative forms and in French from the vantage point of northern-eastern Paris. This work has given rise to a book entitled 75 (Gallimard, 2016) and a current work in progress entitled Faim de figures as well as a shorter English-language publication A General Practice with paintings by Andy Robert (The Cahiers Series, Sylph/AUP, 2021).

For more information on her work, please view her website. 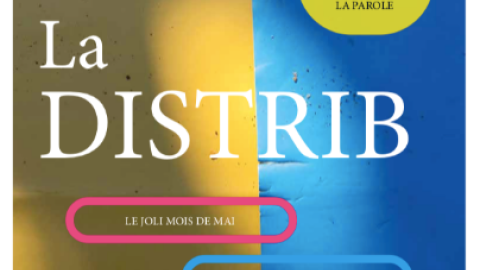 La Distrib magazine is a collective work that gathers material generated in and around the daily breakfast in the street.