The University of London Institute in Paris, otherwise known as ULIP, offers the best of both worlds: a UK degree from the heart of Paris.

Discover what makes us unique. 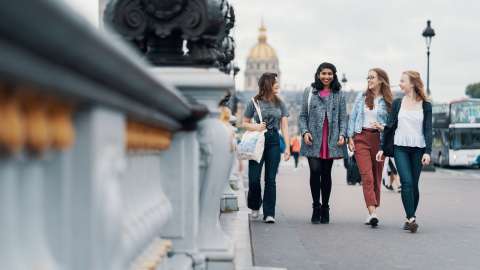 The University of London Institute in Paris, otherwise known as ULIP, offers the best of both worlds: a UK degree from the heart of Paris.

Discover what makes us unique.

As the first British institute on continental Europe, our mission is to connect the UK with the Francophone world by providing a hub for fruitful academic exchange and enabling our students to gain invaluable international experience.

Originally known as the Franco-British Guild, the Institute is dedicated to promoting the study of language and cultural understanding and offers interdisciplinary undergraduate programmes in the fields of French Studies and International Politics. It also runs a postgraduate programme in Urban History and Culture with an option of a term at Queen Mary University in London. Additionally, it hosts two postgraduate Queen Mary University of London programmes in Paris in law and international relations.

An exceptional and life-changing learning experience

We provide an exceptional learning experience for our students, combining the benefits of a small welcoming institute with all of the advantages of a leading UK university with global reach. Studying at ULIP will either lead to the award of a University of London or a Queen Mary University of London degree, internationally-recognised qualifications that will stand you in good stead for your future career.

Paris has long been a major cultural and intellectual crossroads, recognised throughout the world as one of the great centres for creative excellence. Today, Paris is one of the most influential cities in the world and a leading centre of politics, education, entertainment, media, science, and the arts. The University of London Institute in Paris aims to be an academic institution of distinction through excellence in teaching and research and the relevance of its academic activity and engagement as a bridge into Paris and mainland Europe.

We believe that going to university is about more than just continuing your education. It should be an opportunity to gain a wealth of experience that will prepare you for the challenges ahead. Studying at the University of London Institute in Paris, in the heart of one of the world's most beautiful cities, is a truly life-changing experience.

The University of London

The Institute is a central academic body of the University of London, one of the oldest, largest and most diverse universities in the UK. Established by Royal Charter in 1836, the University is recognised globally as a world leader in Higher Education.

The federal University comprises 17 independent member institutions of outstanding global reputation, together with a number of prestigious central academic bodies and activities, including the School of Advanced Study, Senate House Library and the Careers Group.

One of the largest, most diverse universities in the UK with over 120,000 students in London, and a further 50,000 studying across 190 countries for a University of London degree.