We offer great opportunities for people interested in working in a unique British organisation within the higher education sector from the heart of Paris.

University of London Vacancies Job Openings in Paris at ULIP 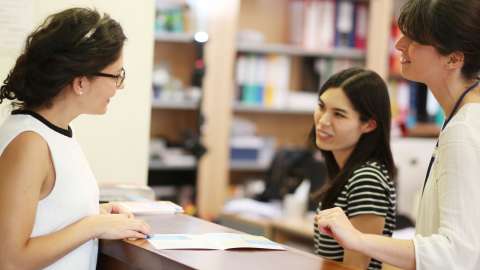 We offer great opportunities for people interested in working in a unique British organisation within the higher education sector from the heart of Paris.

University of London Vacancies Job Openings in Paris at ULIP

The University of London Institute in Paris (ULIP) is a British higher education institution located in the 7th arrondissement of Paris. It is part of the University of London, one of the largest, most diverse universities in the UK that pioneered the concept of ‘education for all’ when it was founded in 1836. It has continued to innovate ever since, consistently reimagining learning, teaching and research to anticipate the needs of the future.

We offer a gateway into the Francophone and European world engaging the University of London in a rich series of academic relationships with its French and European counterparts by providing a hub for fruitful academic exchange and enabling our students to gain invaluable international experience.

At the university's heart is collaboration: it is a Federation of 17 London-based Member Institutions of outstanding reputation. ULIP has strategic partnerships with three member institutions within the federation: Queen Mary University of London, King’s College London and Goldsmiths, University of London. In addition, we work closely with British Council France, with whom we share the building, on policy dialogues and other initiatives, as well as HESAM University in Paris and Thomas Jefferson University in Philadelphia.

The University of London Institute in Paris is a small friendly institution where every employee plays a crucial role in the university's success. You will be joining a collaborative and autonomous workplace culture, where employees are encouraged to explore the full potential of their skill sets and show a high degree of flexibility while maintaining a strong focus on student satisfaction and business performance.

Thank you for your interest. Unfortunately, at this time, we don't have any job vacancies at ULIP.

Please feel free to have a look at the University of London's website for other opportunities.

Interested in the University of London organisation? Check their vacancies web page for more opportunities.