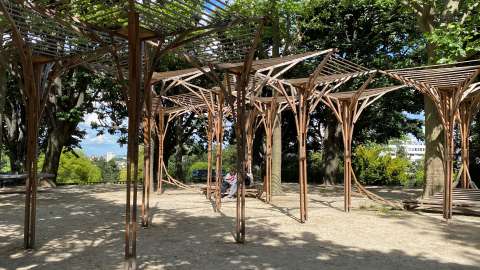 In recent years, the mobilisation of ‘nature’ within urban planning and design has taken a shift. The language of green ‘spaces’ - parks, gardens and so on - has been replaced by that of green ‘infrastructures’, as an understanding of the importance of plant life to health, climate adaptation and food security has entered mainstream planning thinking. In the context of these intersecting crises, this project will reveal how changing imaginaries of urban natures stage new forms of publicness, and interrogate the more-than-human political endeavours they entail.

As philosopher Emanuele Coccia (2018) argues, plants are not just ‘in’ space but construct reality itself, via their production of a shared, breathable atmosphere. How do their configurations, then, shape the way we experience ourselves and one another in the urban public realm?

Paris is an ideal territory to illustrate this shift. Whilst its grand, symmetrical gardens were conceived as a spectacle of the ordering (or indeed domination) of nature by ‘man’, its mayor Anne Hidalgo is now proposing to rip up symbolic public spaces and ‘rewild’ them as urban forests, acting as working infrastructures to fight the effects of excessive heat. This represents a transformation in the design and political mobilisation of urban natures, but also in ideas of the urban public. Tamed rows of topiary were produced as a passive stage for the bourgeois performance of the ‘promenade’, whereas rewilding could be seen as a counterclaim for the political participation of non-human life on its own terms. Meanwhile, in London, productive ecologies like allotments and rural commons, with marginalised political histories, are seeing mainstream acceptance in new urban design.

Walking with the Non-Human

Starting from the observation that “the casting of nonhuman life as infrastructure affirms, but also troubles, what constitutes infrastructure” (Barua 2021), this work will connect infrastructural critique to public sphere theory, design research and studies of urban ecology. The core of the research will be around three collective walks, programmed for Spring 2022 in Paris and in London, each (literally) exploring public atmospheres at three different scales.

Accompanying research seminars, also delivered in both Paris and London, will bring together scholars with artists and activists, equipping participants with both observational tools and frames, drawing on sonic and choreographic walking methods to produce a critical cartography of connections between human and non-human cultures.

In recent years, ideas of nature in urban planning and design have expanded. The language of parks and public spaces is being eclipsed by that of urban commons, green infrastructures, and rewilding. These ecological forms are imagined as responses to environmental challenges – food security, heat reduction, biodiversity and so on. But each has wrapped up within it very different versions of social life, culture, encounter, both human and non-human.

5 May 2022, WALK 1: Green Infrastructures and the Democratic Public (Paris)

This walk will use image-making and photography to document the public interfaces and symbolic forms of urban agriculture and infrastructural greening projects. Its starting impetus will be to ask how we can read these ‘new’ infrastructures in terms of their production of a symbolic landscape. What are the tensions between the performance or imposition of ideas of sustainability through state-led green infrastructure, and the ecological transitions brought about by these infrastructures? The walk will be associated with a seminar focusing on the relationship of state-led planning and urban ecology.

We might think it strange to see democratic bodies tasked with the regulation of cities talk about ‘rewilding’ public spaces, when true ‘wildness’ is antithetical to the regulatory nature of urban planning and its disciplining of materiality to create a functional urban system. In the summer of 2020, as nightclubs remained closed after the spring Covid-19 lockdown, queer people lost access to crucial spaces for forms of gathering based around fluidity of gender expression and sexual intimacy that are regulated out of the public realm but central to the construction of queer counter-public space. This walk will ask whether urban rewilding could entail a social and cultural deregulation and what it would mean to invite true wildness into central urban public spaces. Drawing from techniques in choreographic and dance practice as we move, what intimacies can we sense between marginalised forms of human and non-human life?

Urban commons can claim to counter the dominance of passive material and symbolic consumption within urban public spaces - including green spaces - by offering their participants engagement in productive cultivation and maintenance of collective resources. Hybrid community gardens, allotments and cultural gathering spaces are classic examples of such ‘commons’. Social structures of commoning, though, are arguably at odds with a classical definition of the urban public realm as a world of strangers. This session will investigate the relationship between the human and non-human configurations that are particular to urban commoning, and their aesthetic and ecological distinctions from the symbolic public landscape of state-led green infrastructure. The walk will seek out the forms these possible contradictions take with the aim of grasping what non-human infrastructures for racially just and inclusive commons might be. It will be supported by a seminar focused on what kind of political relationship is constituted by the community gardening that forms the basis of many urban commons, and the issues in their socially-delimited nature.

After a PhD in Architectural Space and Computation at the Bartlett School of Architecture, John Bingham-Hall has pursued his interests in the ‘staging’ of public life and how such processes can contribute to understanding the socio-political challenges cities face today to be made more dynamic, open, and just. Spanning scholarship, creative practice and cultural programming, his work has stretched across multiple scenes and forms. Since 2017 he has been Director of Theatrum Mundi created initially under the auspices of the London School of Economics Cities centre, led by Professor Richard Sennett and more recently established as an international research organisation focused on transdisciplinary practice and cultural infrastructures. John’s work has also found expression recently in the forthcoming volume Sonic Urbanism: Listening to Non-Human Life (Theatrum Mundi, 2021), which will be launched at Iklectik Art Lab in London on 19th November.