Women’s education pioneers: following in the footsteps of ‘Hurricane Jessie’

Along with the centenary of the first women’s right to vote, 2018 marks the 150th anniversary of the special examinations for women at the University of London. This important milestone in history will be celebrated throughout the year through our Leading Women campaign and a full programme of events aimed at raising awareness about the University of London’s crucial role in extending higher education to women.

Senate House Library will mark the occasion with an exhibition and programme of events from July 2018, exploring one hundred and fifty years of women’s fight for equal rights in the areas of education, politics, employment and reproduction, with a focus on the achievements of London’s pioneers of progress.

Leading the way for change

Women came up against many barriers and prejudices in their demands for access to university education. Some of the surviving correspondence in the University archive affords brief glimpses into these difficulties. An early example is that of Jessie Jane Meriton White, who in 1856, upon her return from Italy, presented herself as a candidate for the examinations. 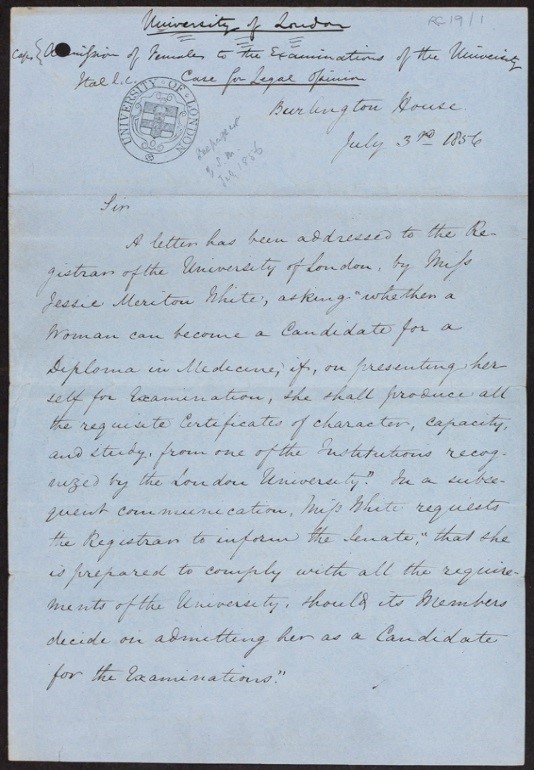 Meriton White applied to the Senate of the University of London for permission to obtain a diploma in medicine. Her request was refused in a lengthy legal opinion based on a literal interpretation of the University’s foundational charter that only contemplated awarding degrees to male candidates.

Meriton White later became famous as ‘Mad Mario’, following her marriage to an Italian Count, or ‘Hurricane Jessie’ because of her participation in Garibaldi’s Italian Revolution as the leader of a group of women who nursed the sick and wounded in the hospitals of Naples. Her case is referred to in some letters dealing with the issue of women’s examinations.

Into the University of London Archive

The University of London Archive holds the key to interesting aspects relating to many stories behind the quest for equality in women’s education. Petitions, minutes of Senate meetings, legal opinions, and correspondence afford a unique perspective about the introduction of the special examinations for women in 1868, and how this modest scheme paved the way for greater reform and led to the establishment of the general examinations and the admission of women to degrees a decade later.

Among the documents kept in the archive, the two supplemental charters granted to the University in 1867 and 1878 are records of great significance. They officially sanctioned fundamental reforms in the higher education system at the time, but more importantly they are part of the collective memory of the University of London as a pioneering force in advancing access to education[1].

The changes that led to the establishment of the special examinations for women in 1868 took place in the context of a wider contemporary debate inside and outside the walls of the University. The voices of leading advocates of female education resonate in the records that have survived. One of these early advocates was Joshua Girling Fitch, assistant commissioner for the Schools Inquiry Commission in Yorkshire and prominent educationist who devoted much of his energy to improving the education of women. In a lengthy letter addressed to the Vice-Chancellor of the University George Grote in 1866, Fitch comments on the recently approved special examinations for women, and argues whether such a scheme could cause more harm than good by ‘attempting to settle authoritatively what women ought, and what they ought not to learn’. Fitch is also rather critical about the inequalities in the provision of education for boys and girls in schools, which he considers being the root of the problem. 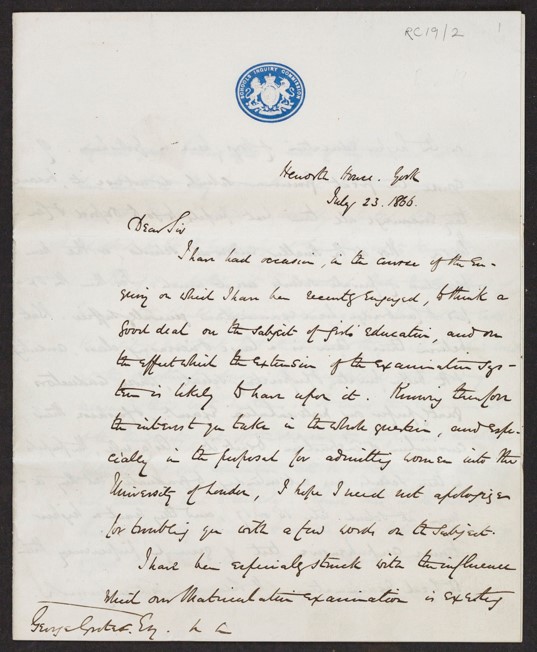 Letter of Joshua Girling to George Grote on the Special Examinations for Women scheme and on educational matters, 23 July 1866, University of London Archive, RC/19/2

The record of the women who sat the special examinations for the first time is probably one of the most potent reminders that access to higher education was the preserve of the few only one hundred and fifty years ago. The names of the female candidates appear neatly written in the volume of the Minutes of the Examination for Women that took place in May 1869. Next to them we can see the subjects they took up. Only six candidates passed but their identities are more revealing that it could appear at first sight. In this first list we can find leading women such as Eliza Orme, who became the first female to qualify as a lawyer in England and who also became an advocate for women’s rights. It is no coincidence that the struggle for equal access to higher education and the cause for equal civil rights and liberties were often entwined. In fact, it could be argued that they were the two sides of the same coin. 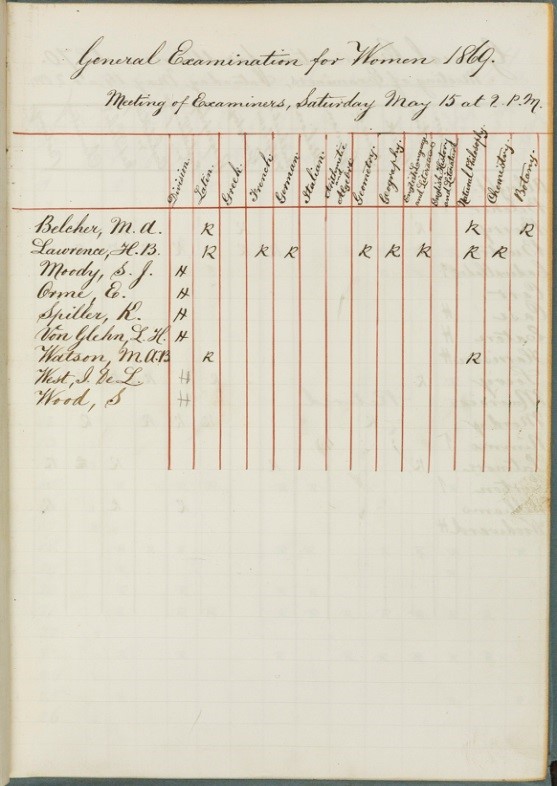 Through the Rights for Women: London’s Pioneers of Progress exhibition and events we will reveal these and other hidden stories of women’s struggle for equal rights, as told in their own words, and bring to life unique items from Senate House Library collections rarely seen before.

We will highlight the many issues that these pioneers of progress encountered throughout their lives and, in doing so, demonstrate that in spite of significant steps taken in the direction of full equality, these topics remain as relevant and current today as they were one hundred and fifty years ago. 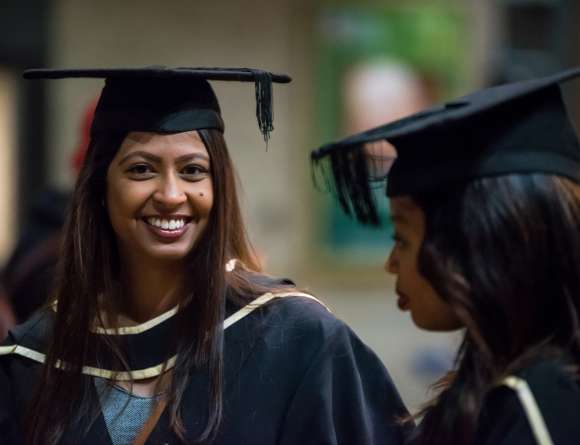 2018 marks the 150th anniversary of women being permitted to sit ‘special examinations’ at the University of London. 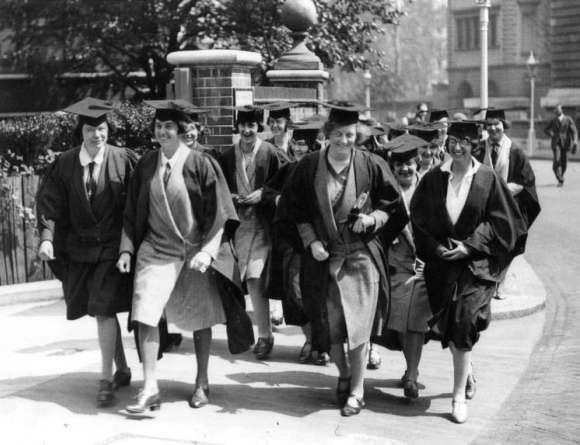 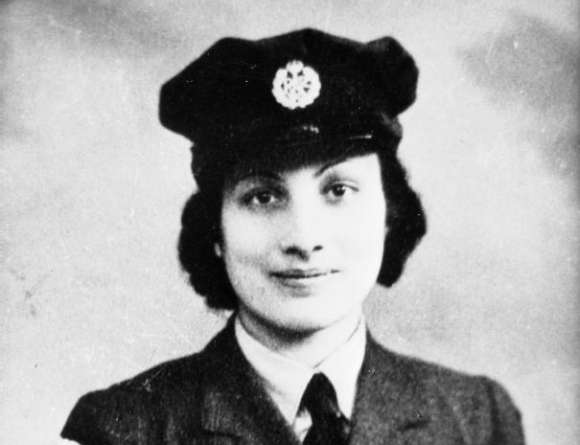 We explore the life of an extraordinary woman associated with Bloomsbury, gardens and espionage – secret agent Noor Inayat Khan.