Find out more about 'Writing in Times of Conflict' here

Find out more about 'Writing in Times of Conflict' here 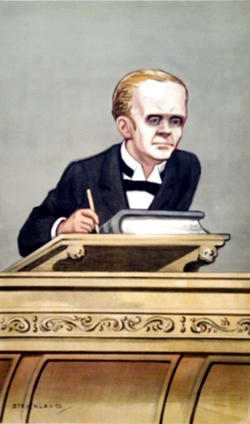 The decade preceding World War I saw a peak of the British and international peace movement, an umbrella term for a great number of ideologically heterogeneous groupings that felt uneasy about the mounting tensions in Europe. The armaments race, especially at sea, and a series of highly perilous political and military emergencies in Europe, from the Moroccan crises to the Balkan wars, had let the European situation, and especially Anglo-German relations, become a real powder-keg.

In the midst of these tensions, in November 1909, the journalist Ralph Lane, using his pen name Norman Angell, published his famous pamphlet Europe’s Optical Illusion, extended to book length in the year after as The Great Illusion: The Relation of Military Power to National Advantage (November 1910), in which he argued that in an economically interconnected world, war would be futile because even the winning side would lose through damage done to international finance. War, in Angell’s analysis, in a modern interconnected world, simply did not pay.

"military and political power give a nation no commercial advantage; it is an economic impossibility for one nation to seize or destroy the wealth of another, or for one nation to enrich itself by subjugating another (…) The idea that addition of territory adds to a nation’s wealth is an optical illusion of like nature, since the wealth of conquered territory remains in the hands of the population of such territory." Norman Angell, Europe’s Optical Illusion (London: Simpkin, Marshall & Co., 1909) 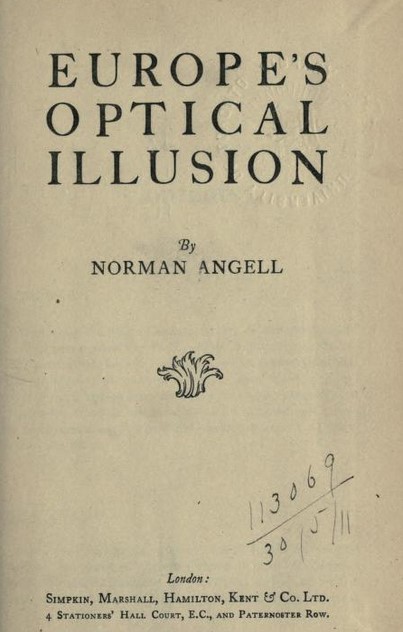 While not without flaws, his analysis was a refreshing new take on Pacifism, clearly distinguishing itself from the traditional non-resisting peace movement, as represented for example by the British Peace Society (1816) that based its arguments on moral and religious grounds, Angell’s ‘new’ pacifism by contrast could claim to be rooted in ‘rational’, economic considerations and could trace its intellectual origins back to Richard Cobden’s and John Bright’s mid-19th century campaign for the removal of trade barriers between the nations as the most effective mechanism for preventing war. It had considerable appeal in liberal circles and often combined the propagation of Free Trade with ideas of international organisation.

Consequently, The Great Illusion became a highly influential international bestseller and the basis for a new school of thinking about international relations. Although its central theses were “partly over-stated and partly under-explained” (Martin Ceadel, Living the Great Illusion. Sir Norman Angell, 1872–1967, Oxford: Oxford University Press, 2009), the Great Illusion’s out-of-the-box-thinking struck a chord in the tense mood of the time as it seemed to offer a way out of the intractable political situation in Europe, which almost inevitably was leading to war, and found extraordinary resonance in the British public and abroad, with numerous editions and translations until 1933. Presenting himself as “a sober realist with conservative and business support, rather than an ‘old pacifist’ of leftist and utopian affiliations” (Keith Robbins, The Abolition of War. The ‘Peace Movement’ in Britain, 1914–1919, Cardiff: University of Wales Press, 1976), it was republished in numerous editions and translations until 1933. The unexpected success was to a large extent due to the influential Keeper of King Edward VII’s household and éminence grise of the period, Lord Esher’s (Reginald Brett’s) subscribing to Angell’s ideas and arranging for its wide dissemination via a newly found institution, named after its sponsor, the industrialist Garton, to study and spread Angell’s theories.

While in historical judgement not always regarded as being ‘properly’ pacifist, Angell’s self-conception certainly was such. As he wrote in the Encyclopaedia of the Social Sciences in 1933, the year for which in 1934 he was eventually awarded the Nobel Peace Prize:

"In recent discussions [the term ‘Pacifism’] has been limited to the doctrines of those who refuse to sanction war for any purpose, defensive or otherwise, in contradistinction to the views of internationalists who would secure peace by international organization, and who either take no stand on the question of military restraint or advocate placing it under the control of an international agency (…) The absolute pacifism of the religious sects is not characteristic of most modern pacifists, who while opposing war in any form do not object to the employment of the police for the maintenance of law within the state." Norman Angell, ‘Pacifism’, in Encyclopaedia of the Social Sciences, ed. by Edwin R. A. Seligman, vol. 11, London: Macmillan, 1933)

With the scheduled British exit from the European Union, the rise of populists on both sides of the Atlantic, and elsewhere, the crises of international organisations, beginning trade wars and the cancellation of international arms limitation treaties, his ideas may actually be more relevant for the present than first expected. Norman Angell's The Peace Treaty and the Economic Chaos of Europe (1919) features as one of 100 items representing different voices who have used the written word to achieve peace in Senate House Library's exhibition Writing in Times of Conflict - on until Saturday 14 December 2019.