This International Women’s Day, Senate House Library starts the digitisation of around 500,000 pages of unpublished Inca Valley photos and papers by the pioneering archaeologist, Dr Ann Kendall OBE, who went on her first expedition 50 years ago. 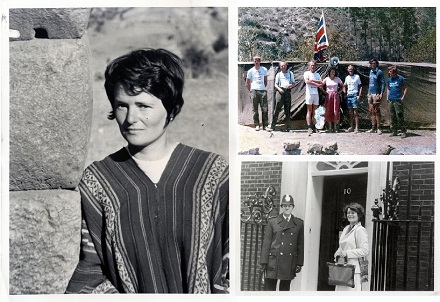 The archive reveals the history of one pioneering woman’s adventure and the social history of Peruvian life in the Inca Valley from her very first recce in 1968 which resulted in her setting up The Cusichaca Trust in 1977. Today, the Trust will have its last ever meeting where they will officially hand over the legacy of their work to Senate House Library, the University of London’s central library.

The digitisation of her work will start this year and will be published and made available online globally next year, with free access within Peruvian universities. The archive is an exciting addition to Senate House Library’s extensive research-level Latin America and the Caribbean collection. Senate House Library is one of the UK's largest academic libraries for arts, humanities & social sciences and holds and cares for over 2 million books, 50 special collections & 1,800 archive collections; around 12 million historic items in total.

Caroline Kimbell, Associate Director, Senate House Library, said: “Not only is Ann a pioneer in the field of archaeology but she is an inspiration to women everywhere as a symbol of leadership and exploration. Ann’s knowledge, fluent Spanish, adventurous spirit and team-building flair enabled her to enlist the help of the British army, teams of ambitious young British archaeologists, grant awarding bodies and commercial sponsors at a time when women in leadership roles were rare. Digitising Dr Ann Kendall’s work will allow us to share her story across the world and keep her legacy alive.”

Dr Ann Kendall OBE founded the Cusichaca Trust in 1977 to carry out archaeological, anthropological and environmental investigations in the Peruvian high Andes, spending over three decades on this expedition. For this work, she was awarded the Order of Merit by the Peruvian Government in 1980 and an O.B.E. in 1994 for her contribution to overseas development work. Brought up in the UK and Brazil, Ann did her PhD at the Institute of Archaeology at University College London, part of the University of London, where she is an Honorary Research Fellow.

Ann’s work in the Andes began with an investigation of Incan infrastructure in the Andean valleys around Machu Picchu, much of which had fallen into ruin in colonial times. She was a pioneer of applied archaeology – the experimental reconstruction of irrigation systems in a challenging environment of high altitude and steep slopes. ‘Cusichaca’ is a Quechuan word meaning ‘Happy Bridge’, it symbolises the collaborative and respectful approach of Ann’s pioneering work.

Dr Ann Kendall and her team researched and reconstructed the monumental land-management infrastructure of irrigation ponds, canals, terracing and architecture in the Inca Valley, that in a pioneering use of “applied archaeology”. Ann Kendall presided over the inauguration of reconstructed canals which provided constant irrigation for some 160 hectares of agricultural terracing and would be a prime source of sustenance and income for nearly 350 families, over 2,000 people. While doing this extraordinary work, the team also made many domestic finds; pottery in particular.

As a result of her work, the valley was gradually returned to productivity, ecological health from the reintroduction of native food and medical crops, and re-population. The Cusichaca Trust’s work is now run by a Peruvian government agency.

Dr Sara Lunt, Honorary Senior Research Associate, UCL Institute of Archaeology, ceramics expert and Cusichaca Trustee, said: "The challenges faced by Ann Kendall in South America in the 1970s are sadly familiar to women leaders today - the politicians, funders, charity CEOs and army commanders she had to deal with were not used to talking to women as professionals and equals. She simply ignored any negative reactions and bravely went on. Many people called this obstinacy, a label frequently attached to women with a mission, but I call it courage."