Cusichaca Collection of over 500,000 items uncovers the history of the Inca civilisation & brings it back to life

Archivist, Sean MacMillan, explores the archive of one of the most exciting south-American archaeological projects of the 20th century...

Cusichaca Collection of over 500,000 items uncovers the history of the Inca civilisation & brings it back to life

Archivist, Sean MacMillan, explores the archive of one of the most exciting south-American archaeological projects of the 20th century...

The legacy of the Cusichaca trust represented through its archive is now available via the University of London, Senate House. What began as a relatively small-scale archaeological project in the Peruvian Andes blossomed into an almost 40-year labour of love that expanded well beyond its initial archaeological focus. In 1978 the Cusichaca Archaeological Project (CAP) was launched by Ann Kendall, with a particular focus on Huillca Racay and nearby areas which are close to Ollantaytambo in the Vilcanota valley in Cusco. The project began as an archaeological one, but when Kendall and her team discovered that many of the systems and sites they were excavating could be brought back to life and used to benefit the locals living there in the present the project became as much reconstructive as it was investigative.

Building on history for a stronger community

The success of the Cusichaca project led to the Patacancha project in the Patacancha valley, also in the Ollantaytambo district, in 1987, where the Trust became increasingly rural developmental in focus. The scale was much grander than Cusichaca, and the Trust undertook, among others, extensive excavations at the fortess of Pumamarca and adjacent canal and terrace restoration. After 1998, work was concentrated in the areas of Apurimac and Ayacucho. These were among the most deprived parts of Peru and had suffered greatly during the time of Sendero Luminoso and the violent reaction of counter-insurgency forces that took place in the late 20th century. By the end of the Trust’s work they had evolved from their purely archaeological origins, to become a multifaceted proactively industrious organisation. Judging the Cusichaca Trust’s work purely on their archaeological endeavours would be like judging a smart phone only on its capacity to make phone calls. The work and achievements of the Cusichaca trust are truly exceptional. They turned shadows of the past, into high definition images for the present, and wove a tapestry of progress across the historic Andean landscape.

The archive of over 500,000 papers, photos, maps and plans is as rich as it is varied. The collection includes the Trust Governance papers, which relates to the overall running of the Trust’s work and its activities. There are also records relating to the Cusichaca, Patacancha, and Ayacucho/Apurimac projects and a plethora of plans and photographs that document the incredible work of the trust, in addition to outreach materials and Ann Kendall’s personal papers from the project. Perhaps among the most the impressive records are finds processing records, which demonstrate the methodical and precise approach the trust adopted. The plans and maps offer an especially graphical account of the Trust’s work, and indicates how much ground they covered in a way which textual records cannot quite match. Lastly, the photographs chronicle the Trust’s work in outstanding colour and detail, as one cannot quite appreciate the beauty and eminence of the Andean landscape purely from descriptions alone. The archive is the memoir of one of the most exciting south-American archaeological projects of the 20th century, and their remaining records act as anchors to a past that is now gone, but should not be forgotten. 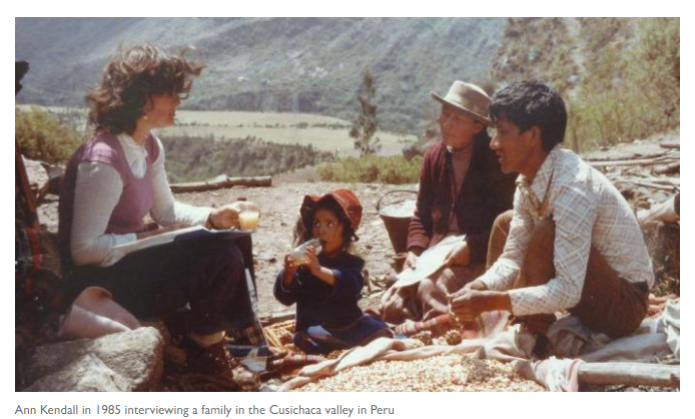 Using the wisdom of the Inca for a sustainable future

This collection should fascinate anyone who is interested in the Inca, Latin-America, and archaeology because it consistently tracks the trusts tactics and practices spanning nearly 40 years, so that one can essentially observe how the project evolved from the late 1970s to the early 21st century. The collection also has tremendous environmental considerations, as the Inca were masters at managing their environment to produce enough food and resources for their population in a pre-industrial era. The Inca found a way to feed and sustain an empire without the hazards of carbon emissions and greenhouse gasses. The Cusichaca team’s success in reconstructing these methods of making the most of natural resources should be of interest to anyone looking for a more sustainable way of living. The sheer diversity and versatility of the Trust’s work should make it of interest to people from a variety of disciplines, whether that be social science, archeobotony, irrigation systems, or farming methods. Moreover, the collection also details the considerable administrative implications of the Trust’s work, including their activities in other areas such as setting up health care access points and providing basic services to locals. The Cusichaca Trust made a conscious effort to work alongside, and develop relationships with, the local communities in the areas where they were active. For this work, Ann Kendall (who did her PhD at the Institute of Archaeology at University College London, University of London, and was an Honorary Research Fellow) was awarded the Order of Merit by the Peruvian Government in 1980 and an O.B.E. in 1994 for her contribution to overseas development work.