When the League of Nations - the first worldwide cross-government peace organisation - was set up in 1920 as part of the agreement of the Treaty of Versailles, it had one main mission: maintain world peace. Certainly no easy task.

When the League of Nations - the first worldwide cross-government peace organisation - was set up in 1920 as part of the agreement of the Treaty of Versailles, it had one main mission: maintain world peace. Certainly no easy task.

From as early as 1929, a decade after the end of the First World War, economies across the world went into sharp decline. This turbulent period, commonly known as The Great Depression, saw increasing social tensions and a rise in totalitarianism. In 1932, The League of Nations and the International Institute of Intellectual Co-operation in Paris, realising the threat to world peace, turned to one of the world’s most influential scientists and lifelong pacifists for help. They asked Albert Einstein - and a person of his choosing - to explore the way in which world peace might be achieved.

Recognising that it was not just minds that needed to be won but hearts as well, Einstein invited one of the world’s greatest scholars on “man’s instinctive life” - Sigmund Freud - to “a frank exchange of views”. The League of Nations and the International Institute of Intellectual Co-operation in Paris published this correspondence in 1933. Senate House Library has in its collection one of the originals from the limited print run of just 2,000 copies.

Delivering mankind from the menace of war

Einstein wrote to Freud on 30 July 1932 asking him if “there [is] any way of delivering mankind from the menace of war?”, acknowledging the limits of his “normal objective” which he states “affords no insight into the dark places of human will and feeling.”

Einstein asked Freud probing questions and outlined many premises relating to tackling conflict that needed exploring if they were to find an answer to the main question.

“How is it possible for this small clique [the governing class] to bend the will of the majority, who stand to lose and suffer by a state of war, to the service of their ambitions?”

“How do these devices succeed so well in raising men to such wild enthusiasm, even to sacrifice their lives?”

“Is it possible to control man’s mental evolution so as to make him proof against the psychoses of hate and destructiveness?”

Freud replied from Vienna in September 1932, conveying his surprise in response to the question but “endorses his conclusions and proposes to amplify to the best of his knowledge” with some of the following interesting insights:

“Brute force is overcome by union, the allied might of scattered units makes good its right against the isolated giant.”

“The laws of such a group can determine to what extent the individual must forfeit this personal freedom, the right of using personal force as an instrument of violence, to ensure the safety of the group.”

“in practice the situation is always complicated by the fact that, from the outset, the group includes elements of unequal power, men and women, elders and children […] the common law takes notice of the inequalities of power, laws are made by and for the rulers, giving the servile classes fewer rights.”

“There is one sure way of ending war and that is the establishment, by common consent, of a central control which shall have the last word in every conflict of interests. For this, two things are needed: first, the creation of such a supreme court of judicature; secondly, its investment with adequate executive force.”

Freud continues, illustrating with examples throughout history, the various attempts to make peace, recognising the volatile situation of the moment:

“in our times, we look in vain for some such unifying notion whose authority would be unquestioned. It is all too clear that the nationalistic ideas, paramount to-day in every country, operate in quite a contrary direction. […] Thus is would seem that any effort to replace brute force by the might of an ideal is, under present conditions, doomed to fail. Our logic is at fault if we ignore the fact that right is founded on brute force and even to-day needs violence to maintain it.”

Over its twenty six years of existence, the League of Nations had some successes but the Second World War would ultimately prove that the League had failed in its duty – and that Freud was right in the above quote. Without the necessary force to implement recommendations, the League of Nations folded and was replaced with the United Nations, founded 24 October 1945.

The UN will celebrate its 75th anniversary in 2020 and whilst no-one could say that world peace has been completely maintained in that time, there has certainly been many developments towards world peace, even if there were, and still are, issues that threaten them.

In considering the current state of affairs in 2019 and on the day when the Nobel Peace Prize is announced, perhaps Einstein and Freud’s reflections might offer some hope. The end of Freud’s letter in particular, highlights the importance of education or ‘cultural development’ towards achieving world peace:

There are many other works by leading figures writing for peace that feature in our free exhibition Writing in Times of Conflict. Explore the power of words used to strive for peace and reconciliation over the last 100 years in 100 books, archives and photos! 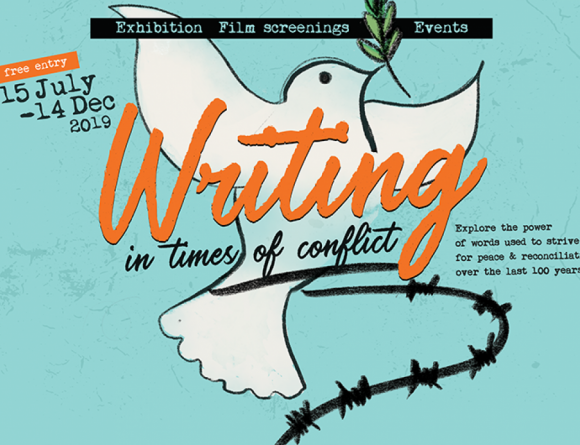