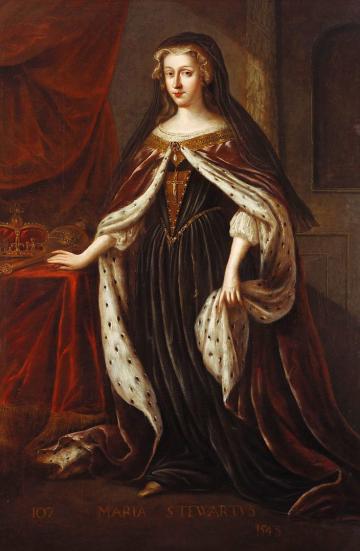 Mary in her Lifetime

Senate House Library’s earliest work devoted to Mary in is De Maria Scotorum Regina (1571). This small 128-page octavo production is attributed to the Scottish poet and historian George Buchanan (1506-1582; part 1) and to the English humanist and administrator Thomas Wilson, a diplomat in Elizabeth’s service (1523/4-1581; part 2). Buchanan had attached himself to the anti-Marian party. He was present at the conference at York in 1568 at which Scottish lords and English commissioners met to justify Mary’s forced abdication from the Scottish throne and her imprisonment in England. This book was prepared for that conference. Buchanan declared that the “casket letters”—letters allegedly by Mary which proved that she had been Bothwell’s lover before they married, and implicated her in Darnley’s murder—were genuine.

The work was produced in Scots as well as this Latin version for easy communication both at home and on the continent. On the financial side, its modest size, printed on eight sheets of paper, ensured cheapness for wide consumption. The printer was the Protestant John Day, whose output also included Foxe’s Book of Martyrs and Sternhold and Hopkins’s metrical psalms. His name suffices to signal the stance of the piece, even before one reads the title of the Scottish version: “Ane detectioun of the duinges of Marie Quene of Scottes, touchand the murder of hir husband, and hir conspiracie, adulterie, and pretensed marriage with the Erle Bothwell. And ane defence of the trew Lordis, mainteineris of the Kingis graces actioun and authoritie”.

The text is in three parts: a diatribe against Mary, an indictment of her alleged crimes, and the content of the casket letters. As noted in a web edition, Buchanan has gathered malicious contemporary gossip and bends facts to suit his purpose. His portrayal of Mary’s murdered husband Darnley suppresses entirely Darnley’s flaws and his murder, before Mary’s eyes, of David Riccio (see Dana Sutton, http://www.philological.bham.ac.uk/mqs/). The caption title of the indictment refers to Mary’s “parricide”. Printed marginal notes summarise the text in hostile form, applying to Mary such words as ‘undignified’, ‘odium’ and ‘execrable’. 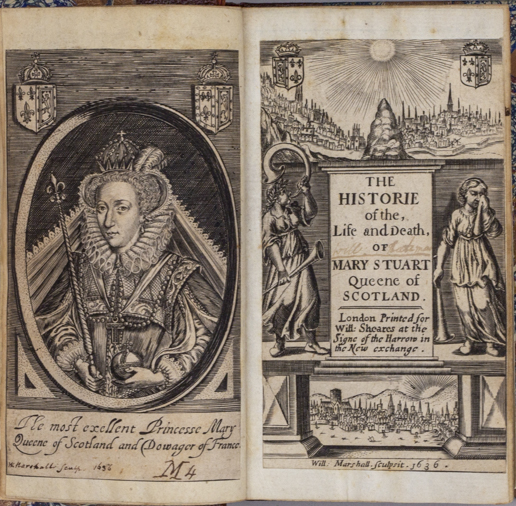 Buchanan’s viewpoint contrasts starkly with that of The Historie of the Life and Death of Mary Stuart, Queene of Scotland, the first biography of Mary Queen of Scots in English. The Senate House Library copy is of the third edition, of 1636: earlier editions appeared in 1615 and 1624. The book is a translation by the historian and spy William Udall (d. 1636) of the relevant parts of William Camden’s annals of the kingdoms of England and Ireland under Elizabeth I (Annales Rerum Anglicarum et Hibernicarum Regnante Elizabetha). By now Mary’s son, James VI and I, was the king of England. He is the book’s dedicatee, rendering a positive view of Mary tactful.

Before readers engage with the body of the text, they absorb the book’s stance from the caption of the frontispiece of “the most excellent Princesse Mary”. The preface and the conclusion sandwich the favourable interpretation of Mary to guide our views. The preface calls her: “the most worthy and royall Princesse Mary Stuart Queene of Scotland, who in all her life being tossed and turmoiled with infinite misfortunes concluded it with an untimely death”. According to the final summary, Mary was: “a woman most constant in her religion, adorned with a wonderfull piety toward God, wisedome above her sex, and was also very faire and beautifull.” Both books are propaganda products of their time, and use layout to support their goals.

Works of Fiction in the 19th century

Senate House Library has the first editions of several fictional versions of Mary’s story, including Friedrich Schiller’s famous play Maria Stuart (1801) and Joseph Mellish’s English translation of Maria Stuart (1801). Mellish, a friend of Schiller, translated the work from the prompter’s copy, and his version contains many passages not found in the printed version.

In our special collections, we also have Sir Walter Scott’s three-volume novel The Abbot (1820), about the time between Mary’s Scottish imprisonment in July 1567 and her ill-fated flight to England in May 1568. The novel’s success proved to Scott the fertility of the sixteenth century as a basis for historical fiction. 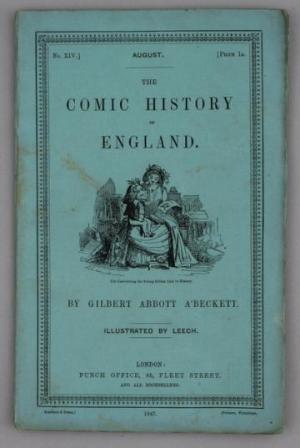 Skipping ahead to the latter part of the nineteenth century, we have Algernon Charles Swinburne’s trilogy of plays about Mary, Chastelard (1865), which aroused complaints from reviewers about Chasterlard’s immoral passion for Mary; Bothwell (1874), which took Swinburne six years to write; and Mary Stuart (1881). Swinburne had a lifelong fascination with Mary, with whom he identified from family reasons: he believed that one of his ancestors, Sir Thomas Swinburne of Capheaton, had been one of Mary’s lovers and had fought for her in England.

By the nineteenth century writers were freer to interpret the history of the sixteenth century. Among the many first editions of Charles Dickens’s work in the Sterling Library is that of his A Child’s History of England. Dickens covers the Tudor period in the third of his three volumes (1854), where he portrays both queens as artful and deceitful. 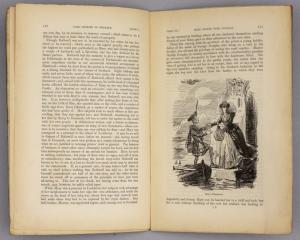 Only a few years earlier, Gilbert A’Beckett wrote, and the leading caricaturist John Leech illustrated, The Comic History of England of which Senate House Library is proud to hold a scarce copy of the original parts. Part 14, published for a shilling in August 1847, contains the story of Mary Queen of Scots, in a chapter entitled “Elizabeth (Continued)”. A’Beckett prefers ‘poor’ or ‘unfortunate’ Mary to the “female tyrant” Elizabeth, an “awful woman” and a “catamountain” who was “jealous of any one marrying anybody but herself”. Yet Mary is not exempt from his satire. The chapter ends with Mary’s executioner holding up her head by its auburn locks, which came off in his hand, whereby: “the grey stubble underneath proved too plainly that Mary had lived for many years a secret adherent to wig principles”.

Victim or traitor? You decide…Explore over 100 books in Senate House Library’s collection on Mary Queen of Scots