“My Usual Self is a Very Unusual Self”: Shelagh Delaney’s A Taste of Honey

Shelagh Delaney, born 25 November 1938, brought a new and vibrant voice to the 1950s English stage: female, teenage, working class, and northern. On 27th May 1958 the play A Taste of Honey was first performed at the Theatre Royal, Stratford. Written by the 19-year-old Shelagh Delaney A Taste of Honey would later transfer to the West End and transform into a film which became symbolic of the late 1950s / early1960s ‘kitchen sink drama’.

“My Usual Self is a Very Unusual Self”: Shelagh Delaney’s A Taste of Honey

Shelagh Delaney, born 25 November 1938, brought a new and vibrant voice to the 1950s English stage: female, teenage, working class, and northern. On 27th May 1958 the play A Taste of Honey was first performed at the Theatre Royal, Stratford. Written by the 19-year-old Shelagh Delaney A Taste of Honey would later transfer to the West End and transform into a film which became symbolic of the late 1950s / early1960s ‘kitchen sink drama’. 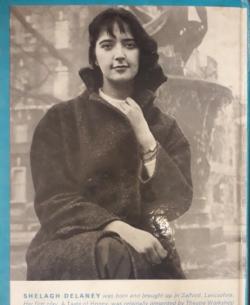 Ostensibly a play about the relationship between teenage Jo and her mother Helen, the story encompasses in its two short acts many comments on the society of the time. Jeanette Winterson, writing about Delaney’s influence, described her as “a light-house – pointing the way”. The play depicts people trapped and struggling but is also full of vitality and moments of pleasure.
Delaney’s play is held in a few locations at Senate House Library including in the Ron Heisler Collection which contains works “relating to labour and radical political movements”.

“Helen is Heard Singing off Stage”

Part of the radical nature of A Taste of Honey is generated by its unconventional methods of development. Delaney submitted her script to Joan Littlewood who produced it within her theatre workshop, which was renowned for its experimental theatrical methods including collaborative, cast improvisation. This method inevitably raised questions as to the extent of Delaney’s authorship of the final version but Frances Cuka, who played the original Jo, stated “most of the best bits were Shelagh’s” (Goorney, p.109). 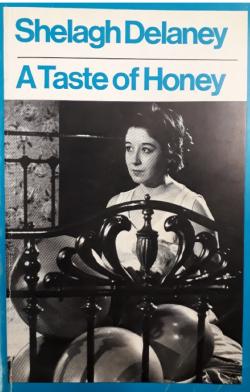 Many of the Theatre Workshop’s actors, who formed the first A Taste of Honey cast, had their origins in music hall and variety. Via improvisation they brought to their parts a level of audience engagement not usually experienced on the mainstream theatrical stage. For example Avis Bunnage, who first played the role of Helen, would turn to the audience and speak her asides directly to them (Patton, p.332) which is mirrored in the script’s stage directions - “(To the audience) I ask you, what would you do?” (Delaney, p.107).

The staging of the play, particularly its integral use of movement and music, also broke theatrical boundaries. The play is filled with song and dance which adds a liveliness and joy that rebels against the sadness and hardship of the play’s social themes and location of “tenements, cemetery, slaughterhouse” (Delaney, p.40).
The characters sing and regularly dance on and off stage, accompanied in the original production by the Apex Jazz Trio. The following example stage direction is illustrative of this merging of variety theatre, dance and song that runs through the play “He waves good-bye, turns and sings to the audience, and goes. Helen dances on to the music…Jo dances on dreamily” (Delaney, p.49)

A Taste of Honey was also a progressive text in its treatment of its social themes. The play includes a single mother, a mixed race relationship, and a prominent gay male character and all are treated compassionately and without the censure typical of the period.

The character of Geoffrey is particularly subtle and sensitive; his sexuality is not judged, rather it is hinted at in throwaway, everyday conversations with Jo (“That’s why I’m letting you stay here. You won’t start anything” Delaney, p.75). In many ways the relationship between Jo and Geoffrey represents an attempt at the creation of an alternative family structure, a chance for them both to receive care in a hitherto uncaring world.

Murray Melvin’s stage portrayal of Geoffrey, later fixed in celluloid, has been cited as an early and influential portrayal of a sympathetic gay man with Nicholas de Jongh going so far as to credit Delaney as a gay heroine for breaking boundaries in this way.

The film adaptation of the play, whilst different in tone to the stage version, is the one that most fans of A Taste of Honey will have seen. Although the play has been performed since the 1950s it is the Tony Richardson / Woodfall Films version which, through its permanence, has generated the strongest sense and influence of Delaney’s work. Filming in a naturalistic style, with black and white shots of northern industrial landscapes, Woodfall Films created a vision of England that was to prove “ground-breaking” (BFI). A Taste of Honey’s themes worked particularly well with this style and its images have seeped into contemporary popular culture. Earlier this year the BFI ran a season on Woodfall Films subtitling it “a Revolution in British Cinema” in which A Taste of Honey naturally featured, and can be glimpsed and heard in this trailer which provides a good impression of the studio’s style.

"Months Have Passed Between This and the Previous Scene”

Despite being 60 years old, the energy, warmth and humour of A Taste of Honey has ensured it still retains an audience. More than this, the play still has a radical edge as it sadly functions as a rare example of a successful working class theatrical voice. Whilst many of the social themes in A Taste of Honey reflect the period in which it was written the dearth of working class voices in the arts has not altered much in the intervening years (for example see this Guardian article from September this year).

Delaney’s inspiration and legacy in her home town of Salford is assured, and since 2014 has been solidified with Salford Arts Theatre’s annual ‘Shelagh Delaney Day’, celebrated on her birthday, which aims to “encourage new writing born out of this creative City of Salford”. To celebrate the anniversary of the play this year the event will open with a film showing of A Taste of Honey. If you have yet to experience A Taste of Honey you can view it on DVD within the library or borrow the play text to see for yourself why it became “legendary as a modern popular play” (Oberg, p.160) and why it is still being shown, discussed and enjoyed today. 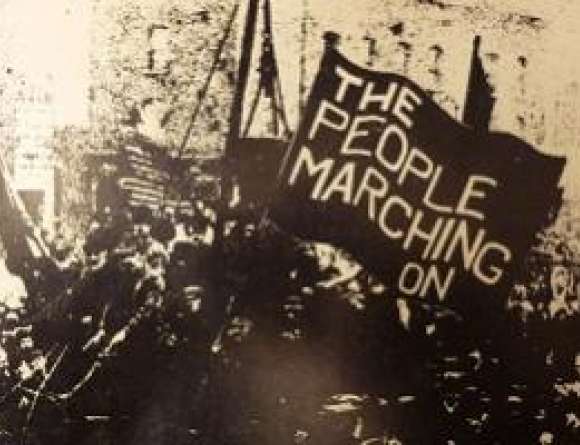 About 50,000 19th- and 20th-century books, pamphlets and periodicals published by or relating to labour and radical political movements, and to political...