Our Oldest and Our Newest: The Vye Collection

Our Oldest and Our Newest: The Vye Collection

The Vye donation is significant for the University of London. It is the first bulk donation of books and the first group of antiquarian books to have entered the University, arriving as early as 1838, only two years after the University’s foundation. As Nathaniel Vye (1791-1840), a medical practitioner in Ilfracombe, Devon, was not a University man, the gift indicates early good will among the wider British public towards the University. Some of the books are very rare: Johann Friedrich Starck’s Morgen- und Abend-Andachten frommer Christen auf alle Tage im Jahre (1766) is the only copy of the fourth edition (noted on Copac), while the first edition of Amadei Cretuzbergs gottseelige Betrachtungen auf alle Tage des gantzen Jahres (1725; actually by Philipp Balthasar Sinold von Schütz), reprinted at least six times in the eighteenth century and once in the nineteenth, is currently recorded in no edition at all on Copac beyond the Senate House Library copy. 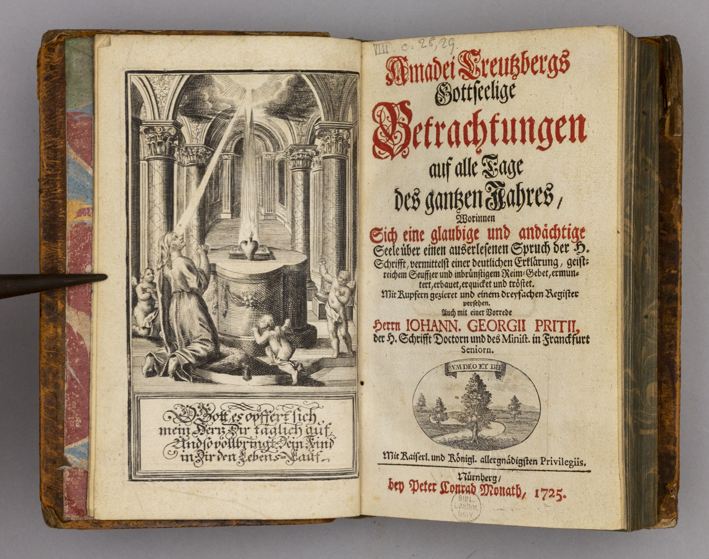 In 1838 the Senate Minutes of the recently formed University of London announced a gift of 185 volumes from Nathaniel Vye, Esquire. Who Nathaniel Vye was, why he should have given 185 volumes to the University of London, and, most importantly, what these volumes were, remained unstated. Whereas several educational reports donated in the same year were itemised in minutes of the Committee of the Faculty of Medicine, a record of the contents of the Vye donation, if ever made, certainly has not been kept.

In the course of cataloguing, I serendipitously came across a book with the pencilled note: “N. Vye, 1 Vol.”. Recognising the name from the 1838 Senate minutes, I realised that this must have been one of the first books Senate House Library received. The University stamp was a rectangular one that had fallen into disuse by 1871, helping to confirm the earliness of the book’s entry to the University.

Other finds soon followed. The books found were all bound in marbled calf, with ornate floral gilt tooling on the spines. I scanned the area of the stacks in the vicinity of these items for similar bindings. A whole clutch of Vye books emerged. The titles amassed shared clear characteristics beyond the bindings. They were mostly eighteenth-century octavos in German, of a religious nature. Duty bound: putting together the pieces of the puzzle

On the basis of the shared elements, I reconstituted the entire collection. A catalogue from 1876 identified books received from its two main sources, the libraries of Augustus De Morgan and George Grote, as well as books given by the East India College Library and the Public Record Office. Finding Vye books was a question of reading the whole catalogue to spot pre-1838 books outside these sources which seemed to fit the Vye remit and pursuing them. Books turned out to be scattered between six locations, including old periodicals. The first volume of a five-volume work, which the subject matter and endpapers clearly identified as Vye’s, was missing and an annotated copy of the catalogue of the library from 1900 stated that one book, which was probably Vye’s, had been discarded as a duplicate. Occasionally books had been rebound, obliterating evidence of provenance. Large library bookplates obscured the Vye note in a couple of books - this had to be carefully removed by Senate House Library conservators. One book to be checked was lost, but by sheer good fortune a book close to where the elusive one should have been on the shelves turned out to have been part of the Vye gift. As a volume of French natural history (Louis Joblot’s Observations d’histoire naturelle, 1754-5), it was an unlikely candidate that might have been overlooked otherwise.

Now it has been reconstituted physically as the Vye collection it gives it a new status, one which befits its importance in the history of the University Library and the University. It also underlines our wealth of 18th-century imprints and facilitates comparative research with the St George’s Lutheran Church Library (Whitechapel) in the British Library. All are welcome to access the collection here at Senate House Library. You can find individual books in the usual way by looking up authors, titles, subjects, or key words, and can browse the entire collection by doing a mixed classmark search on [Vye]. 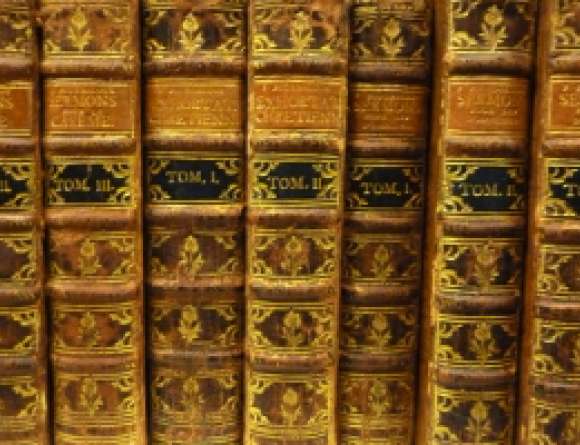