Over 1,300 pamphlets, offprints and journal extracts from the late nineteenth and twentieth centuries collected by the pioneering historian Sir George Walter Prothero (1848-1922) have now been catalogued and are searchable online. 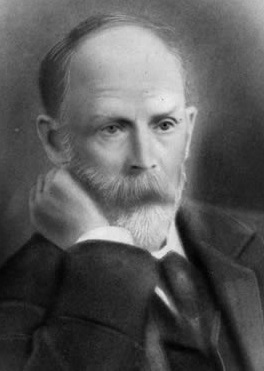 The Times in its obituary for Prothero (12 July 1922) claimed: “To Sir George Prothero…historical studies and their influence in this country…owe a debt which it would be difficult to over-estimate”.

Prothero moved to London in 1899 to take up the editorship of the Quarterly Review and lived very close to Senate House, at 24 Bedford Square. He was President of the Royal Historical Society 1901-5, and bequeathed his papers to the Society. Following the outbreak of World War I, Prothero worked as Historical Advisor to the Foreign Office, and in this capacity attended the Paris Peace Conference of 1919. He died three years later in 1922.

In 1935, 13 years after his death, the Royal Historical Society gave the University of London its Prothero Collection. Prothero’s lecture notes and notes of reading from his professorship are held at Edinburgh University and his diaries, with some other material, are at his alma mater, King’s College Cambridge—where he was successively a scholar, a college lecturer, and the Senior Tutor. Dating chiefly from the early twentieth century and relating primarily to the social, economic and political history of England and Europe during the period 1880-1914, the pamphlets reflect his absorption with contemporary subjects. However, a few testify to his early interest in German history and his early lecturing duties on mediaeval history. Prothero kept his pamphlets in boxes according to broad subject areas, such as women’s suffrage, Irish home rule, and India.

Pamphlets and journal articles are valuable because current thought tends to surface in them before appearing in monographs. For example, there is a pamphlet by Mahatma Gandhi entitled Satyagraha, published in Bombay. Originally, a letter to a friend, written in Gujarati, Gandhi himself translated it into English. Within it, he discusses the idea of ‘passive resistance’, long before he pioneered it against British rule in India in the 1930s and 1940s. Published in 1917 - [Prothero] 85 (19) – it is contemporary to the Champaran Satyagraha, the first Satyagraha movement inspired by Gandhi and a major revolt in the Indian Independence Movement. 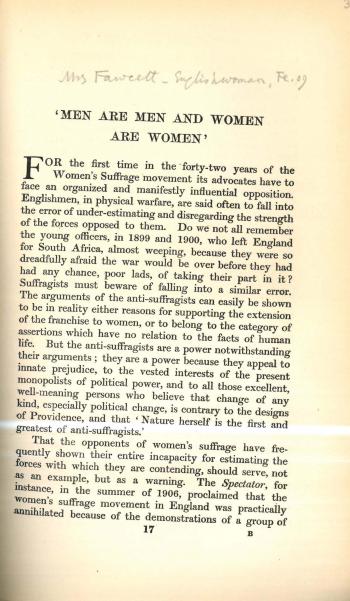 In the case of the Women’s Suffrage bill, the Prothero collection presents both sides of the discussion. “Female suffrage: a letter from W.E. Gladstone to Samuel Smith” (1892; [Prothero] 26 (11)), discourages a second reading of the Women’s Suffrage Bill for fear of inviting woman ‘unwittingly to trespass upon the delicacy, the purity, the refinement, the elevation of her own nature, which are the present sources of its power’. In S.M. Mitra’s freely distributed Voice for Women Without Votes (1914; [Prothero] 27 (1)), the discussion is framed as ‘the greatest problem for the human race’ (p. 11). The prize for a misleading title must go to ‘Men are men and women are women’, an extract from the Englishwoman’s Magazine by Millicent Garrett Fawcett ([Prothero] 25 (32)), annotated by Prothero. The content is robustly clear:

“The whole position is, in fact, absurd: that a woman is eligible for the highest municipal offices and is at the same time unable to give a simple vote for a Member of Parliament. Our appeal is to common sense, supported by justice and experience.”

Click here for the full overview of the collection

Click here to search the Prothero Collection in box order