This photograph is perhaps the most famous image of Una Marson - Jamaican playwright, poet, journalist, performer and campaigner - who is featured in Senate House Library’s current exhibition Rights for Women: London’s Pioneers in Their Own Words. The photo is represented in Jarrett-Macauley’s The Life of Una Marson 1905-1965, and is displayed alongside a self-published book of Marson’s poetry in the exhibition.

The image depicts contributors to the BBC’s Voice programme. Despite Marson’s centrality to this photograph, in which T.S. Eliot and George Orwell both look towards her, the story of her prodigious and energetic life was overlooked for much of the twentieth century. Running counter to this disregard, Marson’s biographer Delia Jarrett-Macauley and academics such as Anna Snaith and Alison Donnell have done much in the last twenty years to reinstate Una Marson’s reputation and influence.

Whilst Una Marson lived primarily in Jamaica she takes her place in a display of London women for the two relatively short, but densely active, periods of her life that she spent in the city: 1932-1936 and 1938-1946. Using images of Una Marson found within the Senate House Library modern collections periodicals, this blog seeks to highlight some moments of her London life.

The full quote above, from the 2nd issue of The Keys: the Official Organ of the League of Coloured Peoples (October1933) relates to the League’s (LCP) London reception of the West Indies Cricket Team, during which “a very welcome innovation appreciated by all was the introduction of the team in verse by Miss Una M. Marson”. This snippet mention of Marson is one of many in the first few issues of the Keys, and highlights just one of her innovations undertaken during her time working for the LCP and its paper. 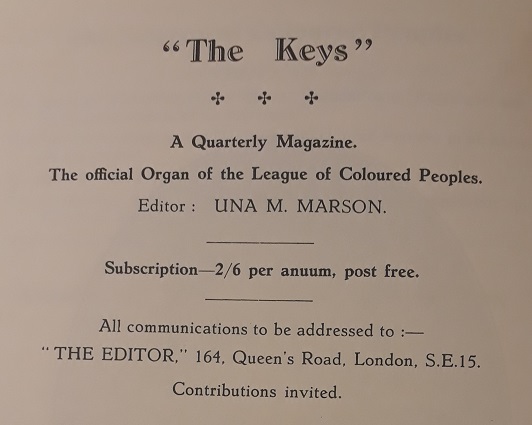 The LCP was formed in London around its president Dr Harold A. Moody and it was at his home in Queen’s Road, Peckham that Marson was based during her first time in London in 1932. Marson’s trajectory within the LCP and the Keys appears swift; her poetry was featured in the first issue in July 1933 and by March 1935 she is listed as full Editor. During her tenure at the Keys she innovated and led and her immense energy is reflected in the breadth of her activities, both artistic and political, a few of which follow illustrated by just some of the many images of Marson that are scattered throughout the journal’s pages. 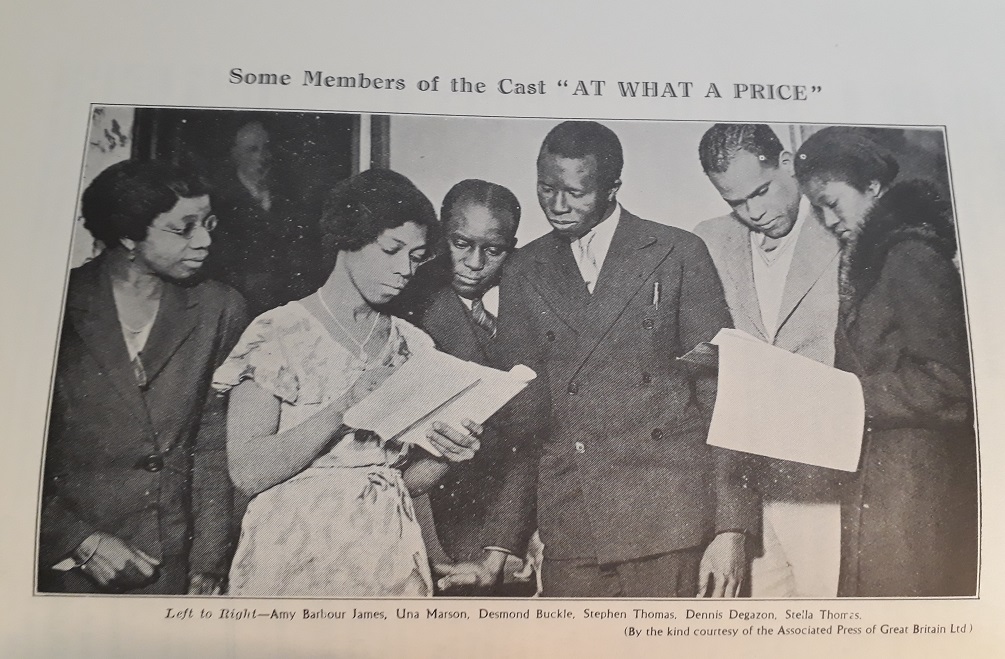 In London, Marson co-wrote a play with Horace D Vaz entitled At What a Price which was initially staged at the YMCA’s Central Club in Great Russell Street. The play was such a success that it was later performed at the Scala Theatre. This play, in which Marson also performed, was intended as a fundraiser for the LCP, but was reported as failing to make money. However, the play’s importance extended far beyond the financial, as it was the first in London to be written and performed by an entirely black creative team.  As stated in the Keys volume 1, issue 4: “we did not make money but we made history” and, again, Una Marson was a key influence on this seminal moment. 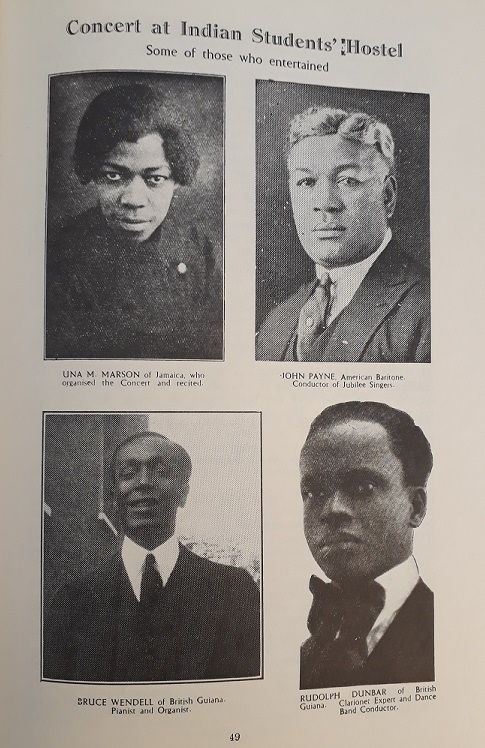 Una’s performance in At What a Price was not an isolated one. As a poet of the written word Marson also undertook public recitations. In January 1934 it is reported in the Keys that she organised, compered and performed in an LCP concert at the Indian Students’ Hostel, as evidenced by this photograph of Marson amongst “those who entertained”. Later in the same issue, Marson is found leading the congregation in prayer at a special service at Whitefield’s Tabernacle in Tottenham Court Road, after which she recited Paul Lawrence Dunbar’s Ante Bellum Sermon. These moments are just some of the many references in the Keys to Una Marson’s public artistic activity, the reimagining of which is aided by the photographic traces. 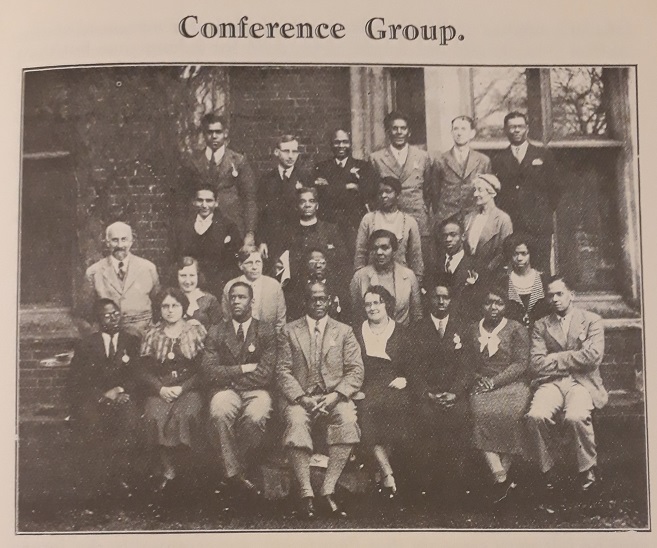 Una’s contributions to the LCP were not only artistic. As secretary to the LCP and their annual conference (she is pictured here on the right of the second row from the front) she was often also a delegate to other meetings, discussing and campaigning on the experiences of the black community in England.

For instance, it was at the London based British Commonwealth League Conference that Marson recounted evidence of the unofficial colour bar that was in place within UK hospitals, preventing qualified black nurses from gaining employment. Marson stated that there is “subtle prejudice” at play and was reported in the News Chronicle (15/6/1934) as saying that “… in England …you come up against incidents which hurt so much you cannot talk about them”.

The World of Yesterday and Today 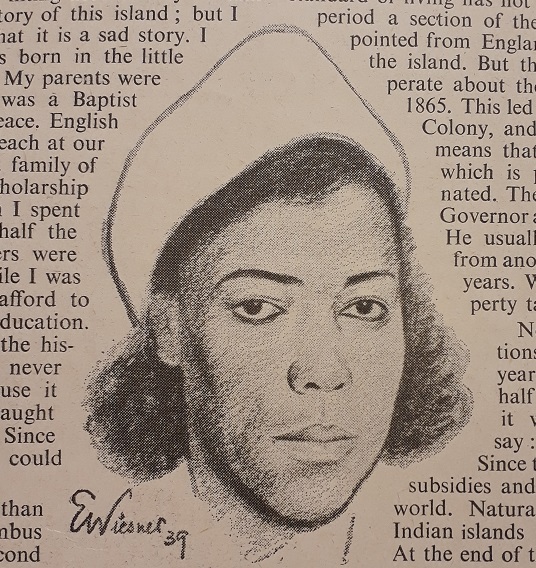 Two years prior to her official employment at the BBC, Marson gave a talk for them which was then printed in the BBC’s weekly magazine the Listener in the 27th July 1939 issue. The speech, retitled the Story of Jamaica, is published as part of a collection of essays on the theme of the World of Yesterday and Today, and is accompanied by this pencil sketch of the author.

Marson’s text is her brief synopsis of Jamaica’s past and present, and includes commentary on race and class, using in some places language that is familiar from her time working at the Keys, such as her references to “subtle” racism in the face of illegal but existent colour bars. She also describes how at school she was “taught nothing about my own island. Since then I have tried to learn all I could about it”, a learning which would take many forms, including the programmes she was soon to broadcast via the BBC network.

The Girl Who Looks After the West Indian Service 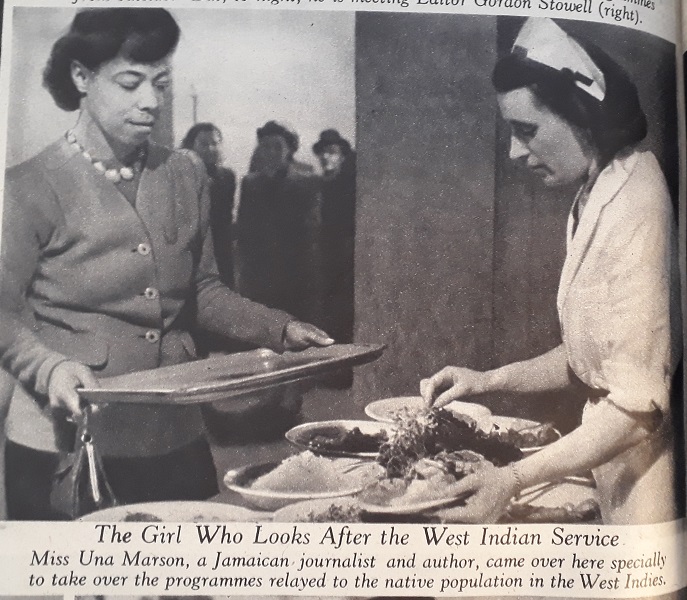 Between 1941 and 1946 Marson was employed by the BBC, as can be shown in the featured image, which is taken from a Picture Post photo article entitled At the B.B.C. Canteen (Nov 27th 1943, p.20). Despite the patronising caption – all the women in the feature are referred to as “girls”– this image captures Marson at a time when she was at the height of her influence within the organisation, as Head of the West Indies service and creator of the programme Caribbean Voices. This programme’s aim was to broadcast writing from the Caribbean and over its 15 year history (Marson produced it for its first 3 years) it transmitted works by key writers such as Samuel Selvon, Andrew Salkey and Derek Walcott.

Given Una Marson’s hugely productive creative and political life in London, of which this image led blog provides only a few examples, it is shocking that so very little of her work is in print in the UK - Peepal Tree’s Una Marson: Selected Poems being the one work that can still be purchased. Her plays Pocomania and London Calling are published by Jamaican press Blouse and Skirt Books. It is, therefore, through extensive library periodical holdings that Una Marson’s London life of the 1930s and 1940s can today be traced and her influence and innovations remembered.

Celebrate the life and work of one of Jamaica's most influential figures in world history by visiting the Rights for Women: London’s Pioneers in Their Own Words and continue her story by sharing widely #RfW18 #RememberHer

The Keys: the official organ of the League of Colored Peoples (1976). New York: Kraus-Thomson Organization Ltd. 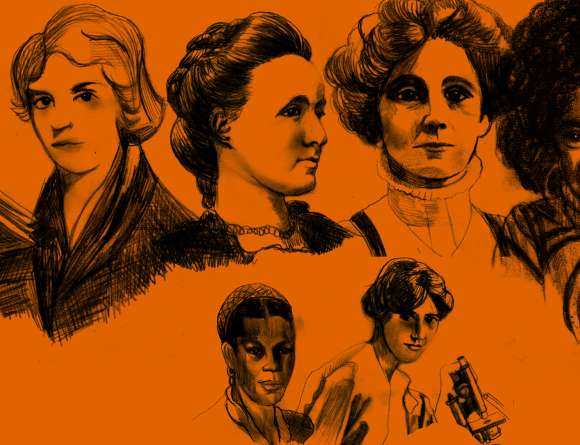