Senate House Library is committed to maximising the diversity of voices by reviewing past and current practices, collections and services as well as ensuring inclusivity is built into and at the heart of collection strategies and decision making in future. 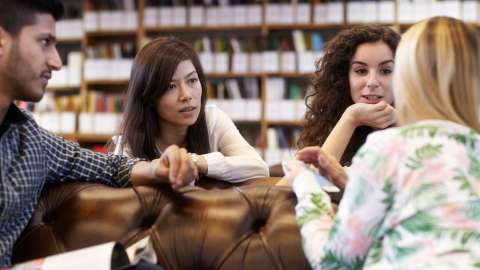 Senate House Library is committed to maximising the diversity of voices by reviewing past and current practices, collections and services as well as ensuring inclusivity is built into and at the heart of collection strategies and decision making in future.

Libraries and archives have an important role to play in improving diversity and inclusion. Senate House Library is committed to maximising the diversity of voices by reviewing past and current practices, collections and services as well as ensuring inclusivity is built into and at the heart of collection strategies and decision making in future.

With over 2 million items and over 150 years of history in the Library, it is vital to review collections while recognising that this is no small task and one that is continual, never finished.

From August 2020 until July 2021, research was undertaken to develop a Collection Development Strategy that covers three main elements assessing:

With a proactive approach to diversity and inclusion, Senate House Library continues to evolve and seeks to ensure collections represent all Library users, regardless of race, gender, sexual orientation, physical ability, age, and political or religious beliefs.

An Overview of the Anglophone Caribbean Literature Collection

Senate House Library’s Anglophone Caribbean Literature Collection (ACLC) contains a mixture of primary texts such as novels, poetry, plays as well as secondary, critical works. The collection holds a number of key texts for the study of Caribbean literature, and also includes some which are less well-known, including from some smaller, non-academic presses. There is a strong emphasis on twentieth-century writers.

The collection is arranged via country, using the Library of Congress classification system. The current location of the collection is not conducive to serendipitous browsing and discovery. The collection is currently underutilised as a resource for both research and leisure reading, and its distinctness as an Anglophone Caribbean collection has been somewhat subsumed within the wider Latin American designation.

Beyond the ACLC, this review project will also consider and bring together Anglophone Caribbean Literature where it exists in other areas of the SHL collections. There is some overlap between the ACLC and the English Collection in the area of Black British Writing, and also the Ron Heisler Collection, the journals collections and the ICOMM collections and archives.

The objective of the project is to make Anglophone Caribbean Literature a more distinct, visible and valuable resource within SHL for both research and leisure reading by:

The eugenics legacy in psychology as reflected in the Library collections

Psychology played a special role in the legitimisation of eugenic ideas, largely because of the development of psychological testing designed to measure intelligence. In Britain, intelligence testing came to prominence through the work of two psychologists, Charles Spearman (1904) and Cyril Burt (1909), both strongly influenced by Francis Galton. Many members of the newly formed British Psychological Society (1901) were also interested in eugenics. Among them, Robert Armstrong-Jones, Cyril Burt, William McDougall, Frederick Walker Mott, and Charles Myers were all members of the Eugenics Society.

Newly created tests (e.g. the Binet-Simon test) were administered to people presumed to be intellectually inferior, which provided quantitative confirmation of this view. This created a central role for psychologists and psychiatrists to identify masked ‘defects’ of the mind, and diagnose ‘feeble-mindedness’ and insanity. Psychology thus became central to the schooling, housing, treatment, and control of those deemed ‘mentally defective’, contributing to the spread of eugenic thinking in places such as asylums, mental hospitals, training schools for the ‘feeble-minded’, and prisons. ‘Mental deficiency’ and ‘feeble-mindedness’ were seen by eugenicists as a major cause for socially undesirable features leading to criminality, violence, poverty and poor parenting.

Many voices from inside and outside academia argue that eugenics remains a quiet but powerful background influence in modern-day psychology and psychiatry. Despite a long-standing lack of agreement between psychologists on what intelligence is and what it involves, there is, seemingly, still a strong practical reliance in many fields on intelligence measuring for classifying people. Therefore, it is vital to look critically at the history of ‘intellectual disability’ as a broader category within psychology in order to understand the depth of dehumanising experiences individuals and groups labelled with the many different labels associated with eugenicist views have been facing.

The recent recommendations following the inquiry into the pivotal role University College London played in the history of eugenics in the UK, and its connection with ‘scientific racism’, are a good example of how we can also begin to address this difficult past within our own collections. The link between the University of London and the eugenics movement goes back to July 1912 when the University held the first International Eugenics Congress in its South Kensington location. This may help to explain the many holdings of prominent figures connected with eugenics Senate House Library has across several modern and special collections (e.g. psychology early texts, psychology tests, psychology monographs and periodical publications, and archives).

This case study aims to identify the psychologists who shared eugenicist views and practices, their works, and their research networks, as reflected in our library collections. Outcomes of the project include:

Project undertaken by Mura Ghosh, Academic Librarian for Psychology, Philosophy and Social Sciences, in collaboration with the British Psychological Society.

Enslavement in the archives at Senate House Library

Out of its over 1,800 archival collections Senate House Library holds a small but significant number of archives with connections to enslavement. The earliest archival material related to enslavement entered the collections as part of the manuscripts of the Goldsmiths’ Library of Economic Literature, which was presented to the University of London in 1903. The holdings were subsequently enhanced with additions throughout the 20th century. Further complementary materials were added through the Institute of Commonwealth Studies’ archive. The archival material in question takes on many forms, including papers of people and companies involved with business and trade supported by enslavement, documents related to colonial administration as well as letters and other materials from campaigns supporting the abolitionist movement.

We are currently undertaking a case study on these archival holdings with the goal to examine how and why these archives have entered Senate House Library’s collections and to improve the transparency, description and accessibility of these collections.

Aims of the case study