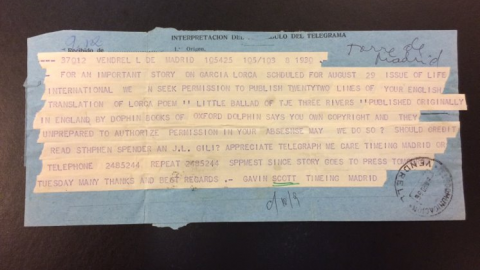 Susanne K. Langer, The Cultural Importance of the Arts, Journal of Aesthetic Education

The European Art and Culture collections of Senate House Library provide scholarly insight into the immensely diverse European cultural heritage and show it in its academic interactivity with the library collections as a whole.

The scope of the collections is naturally wide ranging and broadly covers European literature as well as art, cultural memory and music.

The largest of the Western European Languages and Literature collections is the Romance language collection which covers the fields of linguistics, literature and literary criticism. The material is interdisciplinary in nature, but focuses on the literatures and culture of areas that speak a Romance language. They include the study of Spanish, French, Italian and Portuguese. Additional languages include Catalan, Galician, Occitan and Romanian among others. Preference is given to primary and secondary texts which are interdisciplinary in their outlook, but construct cultural literary Europeanness in transnational literary projects.

They are a central resource for Romance Studies in the University of London and form the centre piece of Senate House Library’s foreign language and literature holdings.

Romance language material from the French, Spanish, and Portuguese speaking countries of Latin America and the Caribbean are located in the Latin American Collections.

The smaller holdings include Catalan, Galician, Occitan and Provençal. Catalan is by far the most significant of the smaller Romance collections and it was augmented by the acquisition of the Gili Catalan archive which make Senate House Library’s Catalan holdings among the strongest in the UK.

It has strong holdings in the Scandinavian languages as well as Dutch, Flemish and other Germanic languages. It is supported by the collection of the former Germanic Studies Library which collected predominantly primary material in German. Together they provide a very broad coverage of Germanic studies.

Senate House Library’s art collection is characterized by its divergence, its collection strengths include European art, aesthetics, ceramics, graphic art and the history of photography.

Together with the film and media collections these are intrinsically embedded in the art and cultural memory studies which support cultural identity and alterity.

In addition, our music collection is an assemblage of books on music, scores, periodicals and e-resources that support a wide range of music studies.

The film and media collections are intrinsically embedded in the art and cultural memory studies and have collection strengths in the historical and critical aspects of film and media coverage of European, U.S., Latin American and Asian cinema, film theory and criticism, aesthetics and practical aspects of film making, general media studies and critical coverage of theatre, music, performance art and theory.

Senate House Library’s music collection is an assemblage of books on music, scores, periodicals and e-resources that support a wide range of music studies from the early modern period to the present.

Art in the Archives

The University of London Art Collection.

Senate House Library understands exile as more than a historical experience and introduces it as a critical paradigm in itself, calling for new modes of intellectual practice and orders of knowledge. Generations of writers, thinkers and artists have articulated radical understandings of the exilic experience, from Ovid to Brecht, Dante to Adorno, Schoenberg and Said. Our diverse collections allow us to newly formulate a critical agenda. These collections support cultural identity and alterity, especially those of ethnic minorities in the literary field of printing and publishing and those that aid the preservation of minority languages.

One example of the many outstanding collections is one of the most important collections of Catalan culture outside of Spain, the collection of Joan Gili, who became known as the “unofficial consul of the Catalans in Britain”. Born in 1907 into a publishing family in Barcelona, Gili emigrated to Britain in 1934 and helped found the Dolphin bookshop near Charing Cross Road, London and began his career as a publisher of Hispanic works. In 1939 Stephen Spender and Gili produced a translation of Nadal’s selection of Lorca’s poems and in 1943 Gili wrote the influential “Introductory Catalan Grammar”. In 1954 Gili became a founding member of the Anglo Catalan Society and later became its president. The library has his private archive, that of the Dolphin publishing house as well as an extensive book collection. Telegram from Gavin Scott to Gili (1966) re Lorca translation, asking among other things for the permission to set Gili’s translation of Lorca’s Casida de La Rosa to music.

“My intention is to set the poem in such a way that it may be sung in English or Spanish, so that your literal translation should be ideal” (MS 1197/10/3)

Friedrich Gundolf (1880-1931) was the most widely-read German author who wrote about German literature during the First World War and the Weimar Republic. Eschewing footnotes and employing a stunningly forceful style he reached out to a large audience without in the least being “easy.” From 1918 until shortly before his death, Gundolf was the personification of literary Heidelberg. The archive reflects Gundolf’s scholarly as well as literary career and contains material associated with the leading European intellectuals and artists of his period. Of the 930 Gundolf correspondents many were forced into exile; figures represented in this collection include Nobel Prize winners André Gide, Thomas Mann and Knut Hamsun and many more.

The William Rose (1894-1961) collection is among the many literary archives of Senate House Library and comprises 56 boxes that roughly span the years from Rose’s school years around the turn of the century to his untimely passing in 1961. They document his education, career, academic research, war service and his tremendously wide-ranging literary, philosophical and political interests.