The paranormal, the occult and the magical

Discover the strange and unexpected: traditions of belief, practice and investigation in the occult, unexplained and magical. 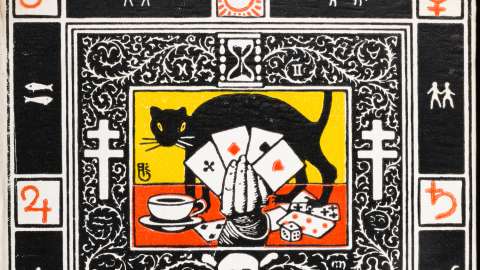 The paranormal, the occult and the magical

Discover the strange and unexpected: traditions of belief, practice and investigation in the occult, unexplained and magical.

A guide to the Library’s classification scheme by classmark and subject can be found here. These can be used to browse the collections on the shelves and via the catalogue.

The foundation collection of the Library’s holdings on The Paranormal, the Occult and the Magical was built by author, psychical researcher and book collector Harry Price over many years before he gave it to the University of London in the late 1930s for the purpose of encouraging research and investigation into the unexplained. The Harry Price Library collection includes over 13,000 books, pamphlets, cuttings, offprints and periodicals dating from the 15th century onwards. Price collected in many areas and the collection is rich on magic, witchcraft, psychical research, parapsychology, prognostication, the occult , hauntings and the paranormal. The 19th and early 20th century are particularly well represented in the areas of spiritualism and psychical research. Price was also a collector of antiquarian material. Among the early books are two copies of a 1494 edition of Malleus Maleficarum and other early works on witchcraft and demonology, a 1572 English translation of Ludwig Lavater's De Spectris, Lemuribus et Magnis atque Insolitis Fragoribus on ghosts and spirits and rare pamphlets by Oliver Goldsmith on the Cock-Lane Ghost and by Jonathan Swift on charlatans. Thanks to a bequest from Price the collection continues to grow with new books and objects reflecting the wide-range of the subjects covered.

In addition to the Library collection, the Harry Price Archive includes his working papers and correspondence, manuscripts, photographs, scrapbooks, film shot by Price, artwork and objects. Much of the archive documents his work in psychical research with files on some of his most famous investigations such as spirit photography, Borley Rectory, the mediumships of the Schneider Brothers and Helen Duncan and Gef, the talking mongoose.

Further information on the Library collection can be found here and the Archive can be searched or browsed here.

Since the arrival of The Harry Price Library, the Library has continued to acquire archive collections on related subjects. Among these are the papers of psychical investigator and anthropologist Eric Dingwall. The papers include his extensive and wide-ranging scrapbooks, records of the Society for the Study of Supernormal Pictures, prints and slides of psychic and anthropological photographs and Dingwall’s kit of essentials for investigations. The collection also includes Dingwall’s correspondence with many major figures of psychical research in the 20th century including Mollie Goldney, Trevor Hall, Guy Lyon Playfair, James Randi, Geroge Zorab and organisations such as the BBC, the Magic Circle and Society for Psychical Research. The correspondence is closed under the terms of Dingwall’s will until 2025 when it will be open to researchers. Other archive collections include records and transcripts of the Edinburgh circle of Emmeline Vyner in the 1920s and 1930s, papers relating to the psychic and author Matthew Manning, including automatic drawings and diaries of Caroline Rhys-Davids concerning automatic writing and the afterlife. A guide to archive sources can be found here.

Harry Price’s library began with one of the most famous and popular books on magic of the 19th century: Professor Hofman’s Modern Magic, first published in 1871. Price continued to collect books, pamphlets and periodicals on all forms of performance magic and allied arts. The collection is a rich source for researchers in the history of magic and popular culture covering many aspects of performance, stagecraft, biography and the visual culture of magic.

Books in the collection date from the 16th to the 20th century and the collection is one of the most significant for the subject in an academic library. Some of the rare works include a first edition of Reginald Scott’s The Discoverie of Witchcraft (1584), the first printed book in English to feature descriptions or conjuring tricks and Hocus Pocus Junior(1634), the first work dedicated to conjuring with illustrations. Alongside these are 18th century ‘exposés’ of the conjuror’s arts and 19th century manuals of magic, including numerous editions of Modern Magic. As well as books, the collection includes pamphlets, journals, posters, ephemera and a small number of conjuring manuscripts from the late 18th and early 19th centuries.  New works, particularly on the history and psychology of magic, are regularly added to the collection.

From first editions of classic 18th and 19th century texts to 21st century interpretations, Senate House Library’s collections are strong in representations of gothic and supernatural literature. The subject is broad-ranging and intersects with studies of medicine, psychology and cultural memory. One of the earliest gothic texts is Horace Walpole’s 1764/5 the Castle of Otranto which the library holds in both first and second editions, the latter subtitled A Gothic Story, while the first edition of Matthew Lewis’s 1796 work the Monk is also held. One of the most famous gothic stories, Mary Shelley’s 1818 Frankenstein; or The Modern Prometheus is held in its first edition but also in reimagined form as a 19th century play entitled Frankenstein: a Romantic Drama and published by Dick’s Standard Plays. The first edition of Bram Stoker’s Dracula (1897) is held alongside an earlier literary vampire, John Polidori’s 1819 The Vampyre: a Tale (also later reinterpreted as a Dick’s Standard Play).

Many of these books are held within the Sterling Library, a collection of c.7000 volumes of first editions of English Literature; section I of this collection contains works published prior to 1900. The Dick’s Standard Plays are held within the Malcolm Morley collection, some of which is also available online via the resource Victorian Popular Culture.

Another source of gothic and supernatural literature is the Harry Price Library of Magical Literature an extensive collection which contains works on all aspects of magic, the occult, psychic research and related phenomena and ideas. This collection is strongest in 19th and early 20th century works but is still added to so also contains more contemporary tales. Fiction features within the collection, including tales of the supernatural. Authors featured include spiritualist and Theosophist Violet Tweedale and Algernon Blackwood, but also more contemporary voices such as Susan Hill and Michelle Paver.

The library’s modern collections, much of which is on open access, are also rich in reprinted primary gothic and supernatural literature, many secondary works on the themes, and also first editions from the latter half of the 19thcentury onwards. Writers featured include Arthur Machen, Olivia Howard Dunbar and Lord Dunsany. Adam Scovell’s Folk Horror: Hours Dreadful and Things Strange (2017) is a key text, focussing primarily on film but with literary relevance, while collections published by Tartarus Press and Swan River Press provide both reprints and new literary voices. A recent re-igniting of literary small and independent press publishing is represented by zine-like publications Hellebore, Fiddler’s Green, Weird Walk, Ignota Books’s Spells: 21st-Century Occult Poetry (2018) and Camp Books’s poster Sigils For Queers (2019).

The library’s growing collection of e-books contain many that are relevant to the subject. Perhaps a good starting point is A Research Guide to Gothic Literature in English: Print and Electronic Sources.

From its beginnings in early 19th century America, spiritualism became a major movement in 19th and early 20thcentury with believers searching for contacts with those ‘beyond the veil’. Mediums and séances attracted both believers and the curious, becoming a sensation of popular culture, with ‘dark séances’ a popular part stage and parlour performances. Alongside the rise of spiritualism grew an interest in scientifically testing and finding evidence for phenomena such as telepathy and the existence of the afterlife. Organisations such as the Society of Psychical Research aimed "to approach these varied problems without prejudice or prepossession of any kind, and in the same spirit of exact and unimpassioned enquiry which has enabled science to solve so many problems, once not less obscure nor less hotly debated."

The Library’s collections are rich with contemporary material on these subjects. These include publications of the Society of Psychical Research, spiritualist journals and pamphlets, investigations of mediums and cuttings and offprints from the popular press.  The Harry Price Library includes early works on communicating with spirits and ‘table rapping’, works by American spiritualists Andrew Jackson Davis and John W. Edmonds and works on and by many mediums and practitioners including D.D. Home, the Davenport Brothers, the Bang Sisters, Emma Hardinge Britten, Mina Crandon and Helen Duncan. Works by the founders and members of the Society of Psychical are well represented including Frederick Myers, Henry Sidgwick, William Crookes, Edmund Gurney and Oliver Lodge and subjects including telepathy, spirit communication, hypnotism, phrenology and hauntings are covered extensively.

The archive collections include accounts of séances, investigations and case studies of mediums and phenomena, photographs and letters, including Harry Price’s correspondence with many key figures in early 20th century psychical research and spiritualism including Arthur Conan Doyle.

The Harry Price Library and the Modern Collections include many studies and histories of these subjects as well as contemporary works on parapsychology. Starting points for research include Janet Oppenhiem’s The Other World: Spiritualism and Psychical Research in England, 1850–1914 (1985), Roger Luckhurst’s The Invention of Telepathy, 1870-1901 (2002) and The Spiritualist Movement : Speaking with the Dead in America and Around the World (2013). From the Fox Sisters in 1848 on, woman played important roles in spiritualism and many titles in the collection cover this subject including Victorian Women and the Theatre of Trance (2009) by Amy Lehman,  The Darkened Room : Women, Power and Spiritualism in late Nineteenth Century England (1989) by Alex Owen and The Sympathetic Medium (2010) by Jill Galvan.

The Library subscribes to a range of full-text and bibliographical resources to support your research in the paranormal, occult and magical. These include collections of digitised journals and archives, e-books and specialist resources such as Victorian Popular Culture covering ‘Spiritualism, Sensation and Magic.’ View the A to Z Database list on our LibGuides platform.